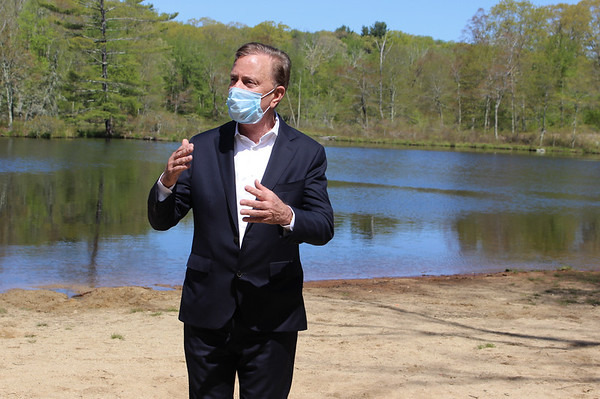 Connecticut Gov. Ned Lamont speaks to reporters at Gay City State Park in Hebron, Conn. on Thursday May 21, 2020. The governor held his daily COVID-19 briefing for the media at the park in advance of the Memorial Day weekend. (AP Photo/Pat Eaton-Robb) Buy this photo
Published on Friday, 22 May 2020 17:02
Written by PAT EATON-ROBB

HEBRON - Connecticut shoreline towns are planning to limit beach access to local residents, eliminate some parking and add extra police patrols to help keep up social distancing as they prepare for a potential influx of visitors over the Memorial Day weekend.

In East Lyme, First Selectman Mark Nickerson said they are discouraging visitors from out of state. Even during the best of times, his picturesque town and its three small beaches become crowded when the much larger Rocky Neck State Park reaches capacity.

“In time, we’re going to welcome all the New Yorkers that want to come up and visit our great little town and eat and shop and get on the beach and enjoy a cute little seaside fishing village,” he said. “But there’s just not going to be that capacity during this pandemic.”

State beaches have remained open, but several towns along the coast have implemented their own restrictions on local swimming spots to slow the spread of the coronavirus, which has killed over 3,500 people in Connecticut.

In Fairfield, where restrictions banning swimming and sunbathing are being lifted this weekend, First Selectwoman Brenda Kupchick said lifeguards will be looking for people not following the health rules and will be in contact with police who also will be on beach duty. Groups at all beaches in the state are limited to five people, unless they are part of an immediate family and blankets must be at least 15 feet apart.

“Those areas are all resident-only and we've made that very clear,” Kupchick said. "So, I don't think other people will be trying to get into those spaces. If they do, they'll be disappointed.”

In New London, the popular Ocean Beach Park will be open to everyone, but there will be electronic signs along Interstate 95 to let people know when it has reached its limited capacity. Mayor Michael Passero said the water is still too cold for people to do much swimming and said the park's pool and rides will be closed.

Connecticut state police say they are prepared to disperse any crowds this weekend, but that people found without face masks or failing to socially distance will be educated before any enforcement action is taken.

“I think if we do our part to provide them with the information needed to keep them safe, it will go a long way,” said Trooper Josue Dorelus, a state police spokesman. “We've been finding a lot of cooperation from members of the public and we don't anticipate that being a huge issue or concern.”

Dorelus said the state police have not been keeping track of citations, but have found that the vast majority of residents comply when asked to put on a mask or maintain proper social distancing.

An executive order by Gov. Ned Lamont this week made it easier for law enforcement to legally enforce social distancing and other orders by expanding the definition of what is legally considered a public nuisance.

The state department of Energy and Environmental Protection is planning to close state parks and trails for the day once their parking lots fill to capacity, which has been reduced at some places to 25% of what it was before the pandemic.

Commissioner Katie Dyke said they will also have patrols to ensure people don't park outside the beaches or parks and walk in.

In other coronavirus news in Connecticut:

Advocates for Connecticut prison inmates say a federal judge has asked them to work with the state Department of Correction on a compromise plan to keep inmates safe from the coronavirus.

U.S. District Court Judge Janet Bond Janet Bond Arterton postponed a hearing that had been scheduled for Friday on a lawsuit filed by the ACLU of Connecticut, which is asking the court to order emergency actions that could include releasing more inmates to protect them from the pandemic.

Dan Barrett, the ACLU of Connecticut’s legal director, said the judge will arbitrate negotiations on a compromise.

“We have a responsibility to our clients - all incarcerated people in the state - to fight with everything we have for releases and other protections from COVID-19 for them,” Barrett said. “If negotiations prove the quickest way to move people out of harm’s way from COVID-19 in this life-or-death crisis, we will pursue them.”

Barrett said oral arguments have been rescheduled for June 1, should a compromise not be reached.

The state has begun testing all inmates in the system for the coronavirus. Six inmates have died of issues related to COVID-19.

As of Thursday, the state had reported 689 infections among prisoners and 374 among Correction Department staff. The department says 492 inmates have recovered from the virus and returned to their original housing units.

A similar lawsuit was struck down last month in state court.

For most people, the virus causes mild or moderate symptoms, such as fever and cough, that clear up in two to three weeks. For some, especially older adults and people with existing health problems, it can cause more severe illness, or death.