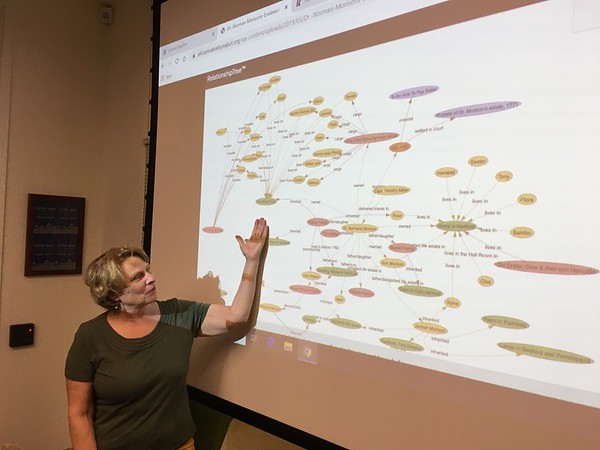 Adam Hushin | Staff CCSU History Professor Dr. Katherine A. Hermes displaying one of the elaborate ancestral trees that can be explored through her website which identifies newly discovered persons buried in Hartford's Ancient Burying Ground. Buy this photo

Who is buried in Hartford‚Äôs Ancient Burying Ground?

The burial ground served as Hartford‚Äôs primary graveyard from 1640 until the early 1800s meaning that anyone who died, regardless of age, gender, race, economic status, etc., was buried there. Now the Ancient Burying Ground is Hartford‚Äôs oldest historic site.

Until now, the question of who is buried underneath the capital city could never fully be answered, as most of the 300 Native American, African and African-American people buried there were not formally recorded.

Many of these individuals have now been identified, and can even be traced to current ancestors thanks to a grant from the Ancient Burying Ground Association, Central Connecticut State University History Professor Katherine Hermes and her team.

Hermes, along with help from current and former CCSU faculty and students, created a website that includes a searchable database of the most complete compilation of people buried in the Ancient Burying Ground.

This database is linked to Ancestry.com so that people can find out if they have relatives in the burial ground. Hermes said that people looking to know more about their heritage will be grateful for this.

‚ÄúThey usually get stuck because the colonial period is too hard to deal with,‚Äù Hermes said.

The database includes many Native Americans and former slaves that were all but forgotten about when they were buried with no headstone and without being included in the burial ground‚Äôs records.

This was something that Hermes came across during her research. In one instance, she found a list several slaves that were buried in the grounds. The records indicated when they died, what they died of, their master‚Äôs names but not their own names. Now, thanks to Hermes, these people can be remembered.

The process of identifying individuals that had been unnamed for hundreds of years was not an easy task and involved a lot of research, Hermes said.

Hermes was not alone in this work, however.

Tavvia Jefferson, who graduated from CCSU with a degree in history in 2016, assisted in the long, meticulous search.

Sharon Clapp, who works as a digital resources librarian at CCSU‚Äôs Elihu Burritt Library, was responsible for designing and creating the website for the project.

Cora Marshall is an art professor at CCSU. Marshall created the portraits that appear on the website which helps bring these newly identified individuals to life.

Hermes said that she also received help from several graduate and undergraduate history students as well as a class of undergraduate computer science students.

‚ÄúI made sure my team was a team of experts,‚Äù Hermes said.

Hermes and CCSU-AAUP President Louise Williams agreed that this work couldn‚Äôt have been completed without help from students and the opportunity for faculty to pursue research as well as teach.

‚ÄúWe tend to use our undergrad students as well as our grad students,‚Äù Williams said. ‚ÄúI wanted the public to know that our faculty and students do work that can benefit the community.‚Äù

The full array of features on the website includes a full list of everyone uncovered by this research, narratives of some of the individuals with key impacts on the state‚Äôs history or with generally interesting stories, an updated history of the Ancient Burying Ground, details about the process of creating the project and a downloadable database of all the information on each discovered individual with a link to their ancestry.com tree.

The database is organized in alphabetical order and includes each person‚Äôs family tree, the level of confidence that they are buried in the Ancient Burying Ground, their race/ethnicity, age and date of death, who their master was and purchase date if they were a slave, wife, children and additional relationships, place of residence and more.

‚ÄúWhat really impressed me about it is that it teaches us something new about Hartford,‚Äù Williams said.

For in depth stories about the newly discovered colonial Connecticut residents, or more information on how to get the most out of the website, there will be a presentation and discussion on Wednesday, Nov. 13 at 5 p.m. in Memorial Hall‚Äôs Constitution Room at CCSU. The event is free and open to the public. It includes refreshments throughout the evening and a Q&A opportunity.

Hermes also sees this as an opportunity to move the project to the next phase.

‚ÄúThis will expose more people to it so that they can contribute to it,‚Äù Hermes said.

This next phase won‚Äôt be worked on by Hermes, who said her work is complete, but that there is much more that can be done, including teaching this new information in schools.

Adam Hushin can be reached at 860-801-5046 or at ahushin@centralctcommunications.com.