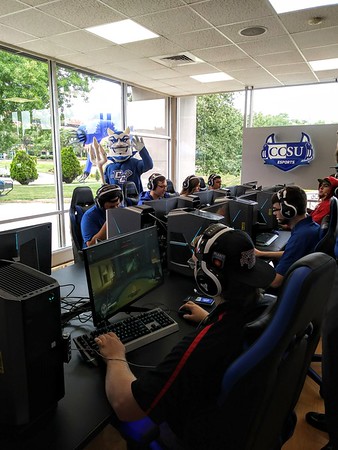 A group of CCSU students gaming at the university's newly unveiled Esports Center on Friday. Buy this photo

As the first multidisciplinary esports center in the state, Toro said it is marvelous that an institution that was founded over 170 years ago as a humble teacherâ€™s college is now at the forefront of a very modern and dynamic technological industry.

The center is not just about playing video games, she said. â€śItâ€™s a place where academics, research, and gaming will meet. This will become a driving force of economic, cultural, and intellectual development in Connecticut. Gamification has become part of our daily lives, from fitness trackers to your GPS. Having a facility like this available will ensure our students are the most employable in the state.â€ť

The center is equipped with state-of-the-art Respawn gaming chairs, Dell Alienware computers, Xbox, Nintendo and PlayStation consoles, a multi-media shoutcasting booth, and ADA-compliant tables and controllers to support all participants.

As a hub for research and development in fields such as interactive media design and game development, the center will also augment some of the universityâ€™s longer standing programs in business management, accounting, technology, cyber security, and computer science, according to the university.

By playing esports, there are many life skills that could be acquired, said George Claffey, the schoolâ€™s chief information officer who spearheaded the centerâ€™s development. â€śThereâ€™s team building, problem solving, critical thinking, mentorship, collaborations - itâ€™s the perfect mix of academics and recreation.â€ť

Claffey said the university green-lit the project at the end of May. After just under 70 days, the entire center was completely outfitted with time to spare before classes started on Aug. 27. â€śIt was an impressive feat,â€ť he said. â€śIt all comes down to the passion of students. This is a great peer system where if students want it, theyâ€™ll build it. Theyâ€™re so committed to have a space and it did become this wonderful space for them to come together.â€ť

Longtime esports fan Lucas Anderson, a third-year student studying robotics engineering, said it is a good feeling knowing that the university supports the students and their interests.

â€śThis is a great way for those of us who may not be as athletically inclined to still be able to participate,â€ť said Anderson. â€śThis is what we love to do and itâ€™s exciting that esports is available to us.â€ť