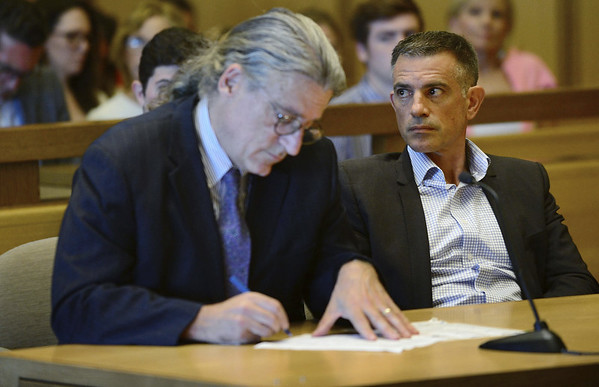 Fotis Dulos, charged with tampering with evidence and hindering prosecution in connection with his wife's disappearance, appears in Stamford Superior Court with his attorney Norm Pattis, left, Friday, Aug. 9, 2018, in Stamford, Jennifer Dulos has been missing since May 24, when she was last seen in New Canaan. (Erik Trautmann/Hearst Connecticut Media via AP) Buy this photo
Published on Friday, 30 August 2019 12:47
Written by

HARTFORD - A Connecticut man charged in connection with the disappearance of his estranged wife is seeking a psychiatric evaluation of his mother-in-law, who now has custody of his five children.

The Hartford Courant reports an attorney for Fotis Dulos has filed a motion in family court on Friday calling for an evaluation of Gloria Farber because she's been previously psychiatrically hospitalized.

Dulos has not been allowed contact with his children since being charged with hindering prosecution and tampering with evidence in connection with the May 24 disappearance of Jennifer Dulos. Prosecutors say he and his girlfriend disposed of garbage bags that contained items that had Jennifer Dulos’ blood on them. Both have pleaded not guilty.

A lawyer for Farber, who lives in New York City, says she's preparing a legal response.