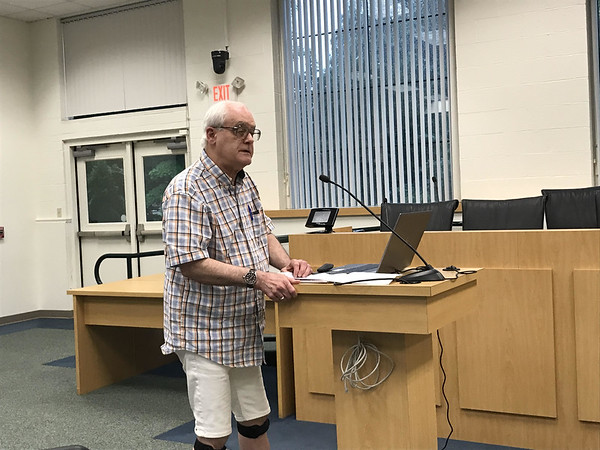 A public hearing was held on whether or not the council should seek the $150,000 grant, which Mark Pooler, CEO of the Southington YMCA, would be used to rehabilitate the pond at YMCA Camp Sloper, located at 1,000 East Street.

Pooler explained that the pond was filling up with silt and sediment as part of its natural life cycle.

“Ponds turn into swamps and then into meadows,” Pooler said last meeting. “This grant would take the depth from 8 to 10 to 12 feet.”

The dredging operation, Pooler said, will result in 90,000 yards of material being removed

The pond is used by Camp Sloper, school programs and fundraisers such as the Sloper Plunge in January. Pooler said that the pond could not be used for two years while the rehabilitation project was underway.

“It is such a resource and gem and the centerpiece of the property,” said Pooler. “Cornelia Sloper Neal willed us this 143 acre property in 1949. We need to be good stewards and make sure it is here for future generations. This plan is a result of a five-plus year study. The dredging would be the first part of a two-phase $6 to $11 million project.”

Pooler said the first phase would focus on “critical beach areas” and continuing previous maintenance. A splash pad would be constructed while the dredging is going on to ensure that the Y still has an aquatics facility.

Pooler added that there are plans being made to still have a Sloper Plunge style event somewhere in January during the dredging.

“I am hopeful for the community’s support,” said Pooler.

Council Chair Chris Palmieri thanked Pooler for all he does on behalf of the community and called him a strong community partner. He said it would be the council’s “pleasure” to seek the grant.

Resident Al Fahnestock spoke during the public hearing. He said he agreed Camp Sloper was a community gem but felt Sloper Pond should not be dredged. He supported building a swimming pool and leaving the pond alone, fearing dredging would turn the pond into a “mud hole” and harm the pond’s fish, turtles and ecology.

“I’ve been to Sloper many times fishing,” he said. “I have seen water fowl, deer and bobcats come to the water. They may be driven away by the construction and noise. As far as I can see, only a small area of the pond is used for swimming. The rest is used for fishing and canoeing. I don’t like what I’m hearing here.”

Fahnestock questioned if the Department of Energy and Environmental Protection had done an in-depth study on the project.

Pooler said that while he is “happy people are passionate about the pond”, the project would adhere to environmental regulations.

“I agree that ecology is a priority,” he said. “We have local, state and federal permits in place already.”

According to ct.gov, The Connecticut Neighborhood Assistance Act Tax Credit Program is designed to provide funding for municipal and tax exempt organizations. $150,000 is the maximum a non-profit can receive and $250 is the minimum. The program can award up to a $5 million cap total between all municipal organizations, businesses and nonprofits it assists each year.