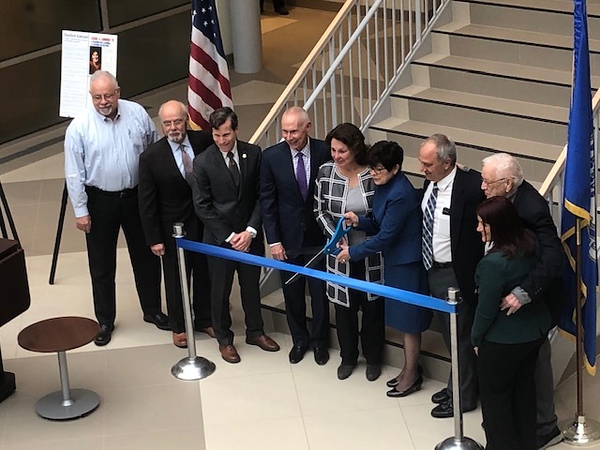 Special to The Press

NEW BRITAIN - The atrium in the new $63 million Willard-DiLoreto building at Central Connecticut State University was packed for the ribbon-cutting ceremony on Tuesday.

Students, staff and distinguished guests lined both the first and second floors to witness the grand opening of CCSU’s newest building.

Willard and DiLoreto halls were both completely renovated and an atrium was constructed to connect the two buildings. The building now houses the Carol A. Ammon College of Liberal Arts & Social Sciences.

Ammon, a CCSU alumna, was in attendance Tuesday to help with the ribbon-cutting ceremony. She said that she was overwhelmed with the building and the turnout for the event.

“To any student who’s out there, right now, listening I would say you’re starting on a journey that will be incredible because of the preparation that you will get at this university,” Ammon said.

The ceremony started with opening remarks from Vice President for Institutional Advancement Christopher Galligan. Galligan stressed that the buildings weren’t constructed overnight, saying, “Today we officially open this remarkable facility, these things aren’t certainly done in any kind of vacuum, it takes years to get these things to come together to officially open.”

“Even though I had not officially started at the university I was invited to help break ground on this project. I have been able to observe and adhere its progress from start to finish, and I am thrilled with the result,” said Toro.

Chief Architect David Barkin explained that although the Willard-DiLoreto complex is officially open, there will still be continuous upgrades to the building as time goes on.

“We hope to see this project connected via pedestrian bridge to the planned garage across Manafort Drive,” said Barkin.

Mark Ojakian, president of Connecticut State Colleges and Universities, expressed gratitude towards Ammon during his remarks, saying, “Over 170 students have benefited from your generosity. Well over $360,000 has been awarded from the Ammot Scholarship fund.”

Both Willard and DiLoreto halls received major upgrades during the construction, including 24 new classrooms, five instructional labs and 57 academic offices.

The atrium is dedicated to students. It houses 50 different offices dedicated to key student support services including Financial Aid, Registrar, Veterans Affairs and the Learning Center.