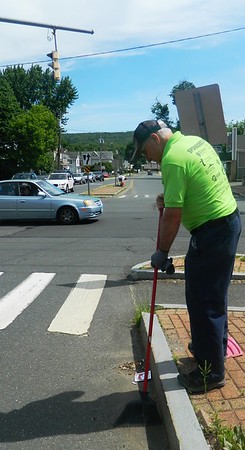 BRISTOL ‚Äì The city‚Äôs west end is cleaner in 2018 than in recent years, according to a group of volunteers who have collected trash there since 2012.

‚ÄúNeighborhood pride is a big thing,‚Äù said Hamlin, who has lived in the west end nearly his entire life. ‚ÄúIf you start by keeping your property clean your neighbors will see that and is passes on. It‚Äôs an effort to maintain that positive feeling in the neighborhood.‚Äù

He also noted that most of the litter volunteers picked up is discarded by travelers passing through the area, not those who call it home.

He and fellow association members encourage local business owners to pick up in front of their storefronts throughout the year. Not everyone follows this counsel, he said.

In the fall city workers are expected to sweep the streets in preparation for the annual Mum Parade, which heads through the west end.

Volunteer Kaye Finnigan lives up the hill from the downtown district.

‚ÄúI drive through the west end a lot and I know a lot of people who live here,‚Äù she said. ‚ÄúBut you don‚Äôt have to live here to care about it.‚Äù

The annual cleanup effort has been going on since 2012. In that time, the neighborhoods have improved, Finnigan observed.

Plainville resident Sarah Johnson used to live in the area and still does business there. These were more than enough reasons to put her work gloves on Sunday.

‚ÄúI still work in the community selling real estate so it‚Äôs important to me that we take care of it, and that people have a positive view of it,‚Äù she said.

The association‚Äôs mission is centered on spreading neighborhood pride and improving the area. Members planted flowers in pots along the sidewalks just a week before.

‚ÄúIt livens up the area,‚Äù Stevens said. ‚ÄúWe want to give it a little love so people take pride in their neighborhood.‚Äù

‚ÄúI found out about this from my neighbor,‚Äù he said, sweeping around the center margin at the intersection of West and Divinity Streets. ‚ÄúI just want to make Bristol look better for the upcoming generation.‚Äù