BRISTOL BITS: Rowboat on pond was there on town business 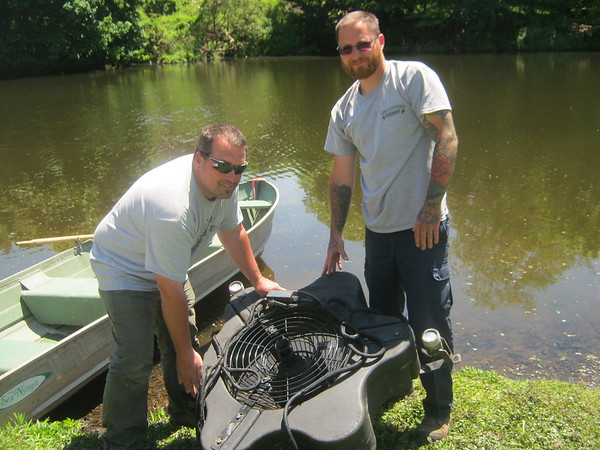 IŌĆÖm sure a lot of folks driving down Memorial Boulevard - meaning driving west from downtown - saw some fellows in a rowboat on the western pond off the road on Monday. Probably thought they were out there to fish.

No. It was Doug Trillo and George Richter, parks department workers, bringing an aerator out to the site of the water fountain in that pond. The department takes the aerators indoors for the colder months until itŌĆÖs time to once again get them out to the fountains to get them spewing water.

IŌĆÖm trying to contact Fred Rich and IŌĆÖm wondering if anyone has info on him to do so.

I recently mentioned that Bristol has had some outstanding duckpin bowlers in its day and with this, I received an email from Cincy Potocki about her father, Anthony Potocki, having been one of them. She writes, in part:

On Monday morning, veterans and volunteers drove to St. JosephŌĆÖs Cemetery with American flags to be placed at the gravesites of military veterans. I wasnŌĆÖt there to see who was doing this volunteer work, but I know that Alice Testa was there with some kind of interesting hat and Bob Barnett was saluting the gravesites and thanking the veterans he was placing flags at.

Jim and Sheila Bousquet were there as usual and IŌĆÖm told that Lenny LaMothe volunteered for the third year in a row after being approached by Putter Kilby. Bob and Darlene Coffey were there as usual in one of their many veterans activities, they, too, take part in. IŌĆÖm told that Bob has recently taken on the huge job of supervising all of the stateŌĆÖs Honor Guard teams.

Chairman of the Beach

I hooked onto a Facebook page with comments by Ken Thompson, a classmate of mine at both Stafford School and Bristol Eastern back in the Dark Ages. I get a kick out of some of KenŌĆÖs comments and one is his self-proclaimed title of being the ŌĆ£Chairman of the Beach.ŌĆØ Apparently he lives on the water or nearby. His most recent entry was asking Bristol residents if they remember the former Washington Superette on Washington Street and Washington Heights, the area of homes where Garfield Road and other roadways meet.

For those who donŌĆÖt know, the female Canada goose in the flower pot at United Bank downtown is incubating eggs and itŌĆÖs a federal law that no one is to touch it. YouŌĆÖll notice, too, that two fellow male geese are nearby in protecting the mother-to-be.