Crocodile Club returns with many laughs 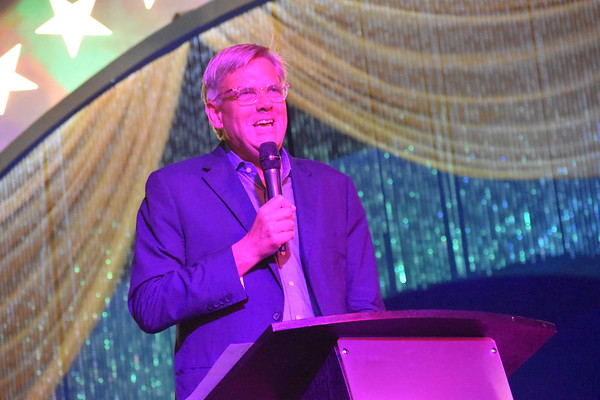 BRISTOL – The Crocodile Club at Lake Compounce returned Friday and featured a variety of area politicians along with comedy writer and Bristol’s “third most famous resident,” the Emmy Award-winning Mike Reiss to roast area institutions and personalities.

According to the New England Carousel Museum Executive Director Morgan Urgo, the first such luncheon held in the event’s history started in 1875 when Glad Norton, Lake Compounce founder, held the event as a thank you for government officials who worked to change the Bristol and Southington border. Politics of a serious nature were to be considered off limits and participants took part in a traditional sheep roast. It became an event meant to bring area residents together in an apolitical nature to poke light-hearted fun at the community.

“Events like this are part of the local culture so it’s very cool to be part of it,” said Shactman. Despite his background in broadcasting, because of the pandemic, the emcee said he had not been speaking in front of in-person crowds as often in such settings and given the nature of the event, it would be a unique experience for him.

Bristol Mayor Jeff Caggiano was the first to take the stage after being introduced by Shactman.

“As many have heard before, Bristol is a great, big small town, however, I don’t think it’s as small of a town as Southington is because, finally after 167 years, Southington has stopped trying to claim Lake Compounce as their own,” he joked.

The mayor noted that when he was first elected, he spoke with Southington Town Manager Mark Sciota and said the Crocodile Club needed to return.

“He said ‘No way. It’s embarrassing. Every year you steal Lake Compounce from us,’” said Caggiano. “He didn’t show up this year.”

The mayor said to his knowledge no Southington official had shown up to the event. He said Sciota may be having the last laugh though because he was enjoying food in Italy.

After Caggiano, Governor candidate Bob Stefanowski took the stage. Stefanowkski said that his campaign was going to win the election because he was going to try his best “to tone down my bubbly, humorous, aggressive personality and I’m going to fight my natural inclination to smile and I’m going to be serious about the next 90 days.”

As the show went on, Republican candidate for U.S. Senator of Connecticut Leora Levy, who made national news with backing from former U.S. President Donald Trump, joked that she ascribed to the “miniskirt theory for giving speeches.”

“They should be long enough to cover the topic but short enough to keep them interested,” she said.

She went on to say she was looking forward to bringing her “chicken soup” to Washington, D.C. in hopes of making it a better place.

Guest comedian and writer Reiss, known for his time writing on the internationally known cartoon “The Simpsons,” closed out the show by roasting area organizations and personalities alike.

“They called me to do this because, even though nobody has ever heard of me, I am still the third most famous person from Bristol, Connecticut,” he joked. “Don’t applaud your shame.”

“What is it with this town?” he continued. “We have a carousel museum and a watch and clock museum. Basically, if it turns in a circle and doesn’t go anywhere, we build a museum to it,” he joked.