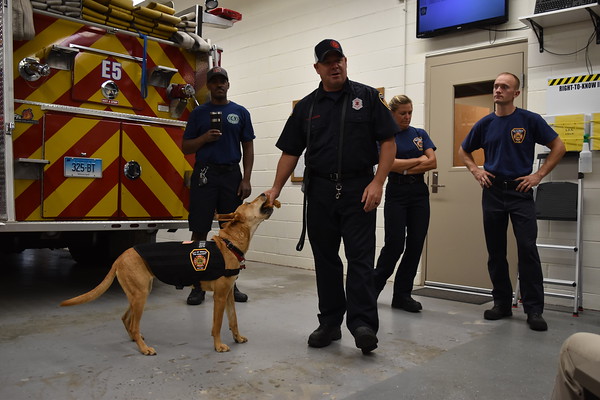 Dean Wright | Staff Okee wears a service animal vest when on the job. Buy this photo

BRISTOL ‚Äì When a community‚Äôs heroes and afflicted are unable to turn to therapy, friends or family for comfort in their trauma, who can they turn to?

‚ÄúHer training, besides your basic sit, stay and lie down; her job is to go around, if we‚Äôre in a room and we‚Äôre there for an emotional support reason, her job is to go around and make friends,‚Äù said Okee‚Äôs main handler, Bristol Firefighter Chris Hayden. ‚ÄúShe has a command where she‚Äôll get up on your lap and let you pet her. She doesn‚Äôt put any pressure on your legs. She takes that pressure and puts it all on her back legs.‚Äù

Hayden‚Äôs stepson is a master sergeant at Southington Police Department and a canine handler. He heard about the idea of peer support animals from a local resident whose child had passed from suicide. The department felt it would be good to have such an animal along to help with tragedies in which first responders come into contact. From there, Hayden felt the Bristol Fire Department could also benefit from such an animal.

Okee is considered a rescued dog and trained by K9 for Warriors, a nonprofit organization based out of Ponte Vedra, Fla., that provides service animals to first responders and military veterans.¬Ý

‚ÄúI‚Äôm like this is a great idea for the City of Bristol,‚Äù said Hayden. ‚ÄúAlong with our peer support team, we can help the citizens in Bristol and our members.‚Äù

The handler noted this was especially important for first responder mental health support efforts as their suicide rates could be high. A firefighter and a police officer go into calls daily and at times witness horrific moments that the public often doesn‚Äôt see, continued Hayden. Such moments leave their mark.

‚ÄúI loved the idea,‚Äù said Bristol Fire Chief Rick Hart. ‚ÄúI thought it would be a great tool for the department in peer support as well as for public education and as an icebreaker to get our public safety and fire prevention message out to the public.‚Äù

City officials said Okee‚Äôs care will be maintained by community donations and various social media accounts have been created in her name.

‚ÄúI look at it from a little different perspective, as a fire department that is emerging,‚Äù said Bristol Mayor Jeff Caggiano. ‚ÄúIn my administration, we hired Chief Hart right as we came on. They were without a fire chief for many months and to see them come to this point, where the morale of the whole department (is high), it‚Äôs great. We had our first firefighter training within town and to now bring in the first peer support dog in the state for this group, it is pretty cool to have our fire department be the one to do this.‚Äù

Lisa Galske and Thaon Crocker, The Doggy Wish cofounders, said their journey to form the group began 18 months ago. The pair began their mission in supporting another dog named Romeo that was blind, diabetic and in need of extra care. Because others helped them help Romeo, Galske and Crocker wanted to pay those efforts forward. The Doggy Wish officially launched July 7 and hopes to grant one ‚Äúwish‚Äù a week.

‚ÄúWe are lifelong residents of Bristol and we saw in the newspaper that the Bristol Fire Department was getting a dog and we knew it was going to make such a huge impact in the community,‚Äù said Galske. ‚ÄúWe had to make that meaningful wish, that‚Äôs what we do in our organization, and provide some funding to make sure that Okee gets off on the right paw.‚Äù

Okee is the group‚Äôs fourth ‚Äúwish‚Äù project. These support efforts can take the form of financial support or supply benefits.¬Ý

It‚Äôs clear Okee is starting to make an impact on those around her, but the impact is perhaps the most visible with her main handler.

‚ÄúI loved this department from the beginning anyway, but to have this opportunity to do this makes it that much greater,‚Äù said Hayden. ‚ÄúI‚Äôve been a Bristol resident my whole life, so the ability to bring the dog out into my community is huge for me.‚Äù