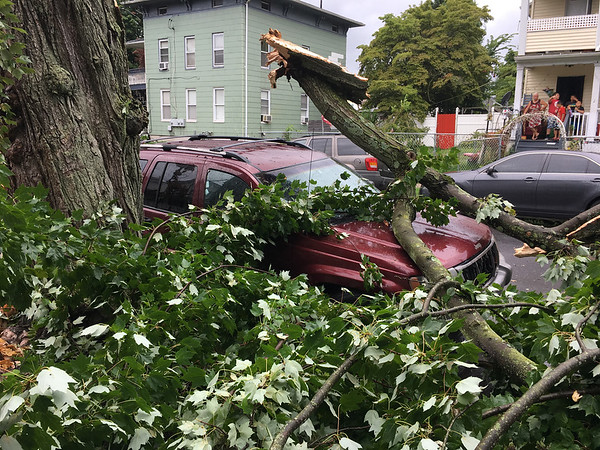 “Power is coming back, but it will take a while,” Haney said. “We had Winter Storm Alfred and Hurricane Irene in 2011 and Hurricane Sandy in 2012 and this will rank up there with them.”

Haney said WFSB’s analysis of the storm was “pretty close to target,” with meteorologists predicting damaging winds that could reach 60 to 70 miles per hour.

“It was pretty close to exactly what we said would happen; we got this one right,” he said. “The storm did end up shifting a little further west, so we saw less rain. We were reporting on that as of Tuesday morning. While we didn’t get as much rain, there were still 1 to 2 inches in parts of the state.”

The winds, Haney said, were at their worst in West Haven, where they reached 75 miles an hour – which qualified them as “hurricane force winds.”

“We also saw winds of about 68 miles per hour in Bridgeport,” Haney added.

Unfortunately, the storm will not bring about an end to the heat wave.

“We’ve having the second hottest July recorded since we started keeping records in 1905,” Haney said. “Last year was the hottest on record. And, now, we have a lot of people without power which means that they have no air conditioning. If you’re not a fan of the heat, I’ve got bad news. It will be 86 degrees tomorrow and 85 on Friday. Friday is the coolest day that we have in our seven day forecast.”

Haney said Wednesday that while the dew point was low, in the 60s to 70s, it was still “a little muggy,” and the temperatures would reach 90 degrees in inland Connecticut. He urged people to “stay cool and stay safe.”

“If you have an elderly neighbor or someone who doesn’t do well with the heat, check in on them,” he said.