Photo by Susan Corica The Forestville Village Association unveiled a plaque in Central Square honoring the late Rex Hamilton for his work with the old Forestville and Bristol Boys Clubs. From left are: Debbie Sullivan, Hamilton’s daughter; Diana Rouillard, his daughter; Diane Hamilton, his widow; J.P. Sullivan, his grandson; and Marcie Czajkowski, a family friend. Buy this photo

Photo by Susan Corica Diane Hamilton, widow of Rex Hamilton, looks at a plaque honoring her late husband, which was unveiled Wednesday morning in Forestville’s Central Square. Buy this photo

Photo by Susan Corica The Forestville Village Association unveiled a plaque in Central Square Wednesday honoring the late Rex Hamilton for his work with the old Forestville and Bristol Boys Clubs. Buy this photo 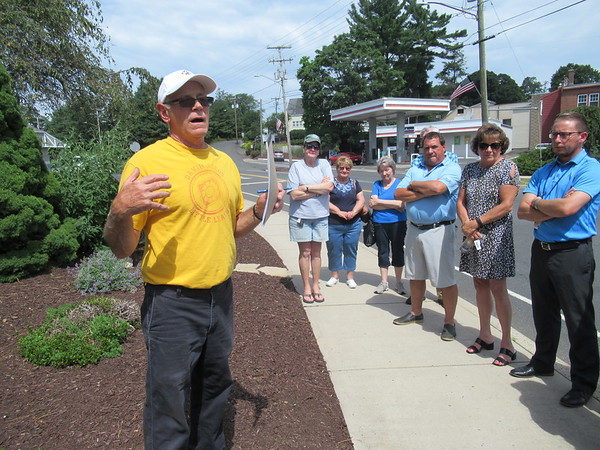 BRISTOL - The Forestville Village Association has chosen the late Rex Hamilton as the first person included in a planned “honor circle” in Central Square.

David Pasqualicchio, association president, said the plaque is the organization’s latest project, the seventh such memorial plaque it has placed in the area. It is the first of a planned series in the park honoring inspirational Forestville residents, he said.

The plaque has a picture of Hamilton, who died in 2018 at age 81. The Forestville Village Association erected it “as a reminder of his tireless work with the Forestville and Bristol Boys Club youth and community,” the plaque says.

The plaque goes on to read: “Originally from West Virginia, Rex attended Fairmont State College, specializing in physical education, while also serving in the U.S. Navy. He came to Bristol in 1962 at the age of 25 and was hired by Spike Norton to be the facility’s Athletic Director for the Bristol Boys Club. One of the highlights of Rex’s working career came in 1973 when he was named Unit Director of the Forestville Boys Club, where he remained until the doors were closed.”

“For 56 years, Rex had an immeasurable impact on countless children and families. His leadership was a voice of reason, teaching the importance of respect for others and simply just being a good kid. Diane Hamilton, Rex’s widow, stated ‘He made people feel good and he never felt like it was a job.’ There are countless stories of the man (Icon) we call Rex, however his impact with kids and how he changed their lives will be his legacy.”

The plaque concludes with a quote from Hamilton: “You teach them and they teach you back.”

“The Forestville Village Association people cannot think of anybody better than Rex Hamilton to start this endeavor,” Pasqualicchio commented.

Pasqualicchio said he attended St. Anthony School, where he knew Hamilton as a sports coach. “Rex has always been a special person in my life, and a lot of people’s lives,” he added.

He recalled that at Hamilton’s funeral he promised Diane Hamilton the association would raise the money to come up with a memorial to her husband “and put it somewhere in Forestville, to never forget the man.”

“He was fun,” Pasqualicchio said. “He had command of everything. He knew how to handle kids. He knew how to bring them up the right way and how to teach them to respect other people. When you have respect everybody respects you, and I can’t think of a person more respected than Rex Hamilton.”

Dave Mills, City Council member representing Forestville, noted the building that used to house the old Forestville Boys Club is just across the street from the park.

He influenced so many kids there, Mills said. “It’s people like Rex who have made the city as great as it is. His influence on the youth of Bristol and his influence on the people of Bristol have been outstanding. I can’t think of anybody more deserving than Rex to be the first person to have a plaque here.”