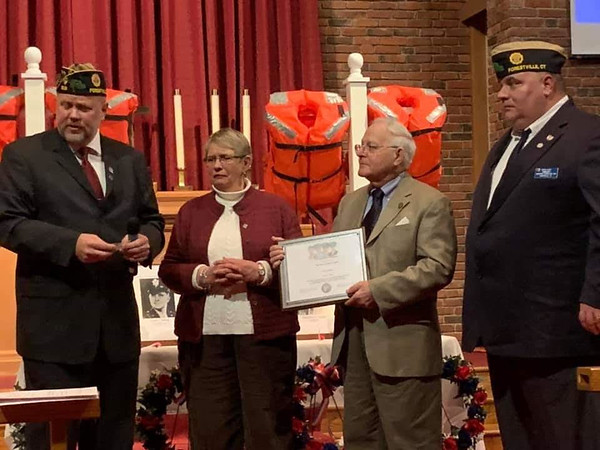 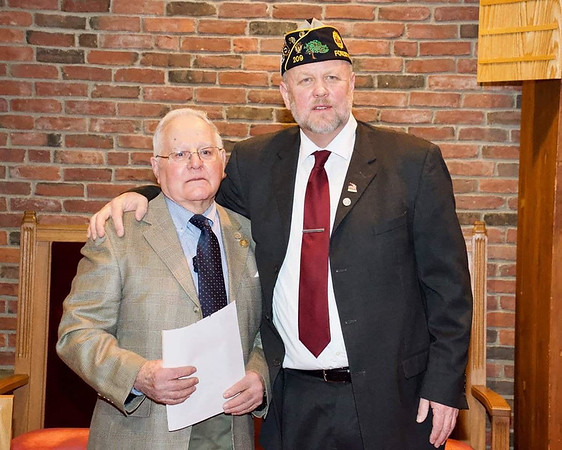 BRISTOL - Leo Bonola of Forestville American Legion Post 209 has been recognized with the â€śLegion of Honorâ€ť award, issued by the National Chapel of the Four Chaplains in Philadelphia.

Brian Avery, commander of Post 209, said that Bonola is the first nominee and recipient of this award in Connecticut. The award was presented as part of the postâ€™s Fourth Annual Four Chaplains Ceremony at Gloria Dei Lutheran Church on Feb. 1.

â€śThis award was designed and directed to those who have and still go above and beyond for their community,â€ť said Avery. â€śIt is presented to individuals who day in and day out conduct themselves in a manner that puts them above most with their selfless acts for their community and fellow men, just like the four chaplains who sacrificed their lives so others could live.â€ť

The Four Chaplains which the Chapel was named after are also sometimes referred to as the â€śImmortal Chaplainsâ€ť or the â€śDorchester Chaplains.â€ť They were four United States Army Chaplains, George Lansing Fox, Alexander David Goode, Clark Vandersall Poling and John Patrick Washington, who gave their lives to save civilians and military personnel as the troop ship SS Dorchester was sinking on Feb. 3, 1943 during World War II.

Avery said that Bonola is a â€śfixtureâ€ť in the Forestville community. In addition to volunteering at both Bristol American Legion posts, he is also a longtime member of the Forestville Village Association and St. Matthew Church.

â€śHe believes in his community and he does so much and sacrifices so much behind the scenes that normally goes unaccounted for,â€ť said Avery. â€śHe doesnâ€™t do it for the recognition. Heâ€™s just proud of everything that we do and he goes to all of our events and breakfasts. When talking to the folks in Philadelphia about putting someone in for this award, he was really the one and only choice for us to be the first person in the state to receive it.â€ť

Bonola was accompanied to the ceremony by his wife, Peggy. The emcee of the event was Chuck Woodin.

â€śIt was a very moving ceremony,â€ť said Avery. â€śAmerican Legion Post 209 wishes to offer a very special thank you to all those who participated and attended.â€ť