Bruce Barton is Post 209's first Legionnaire of the Year 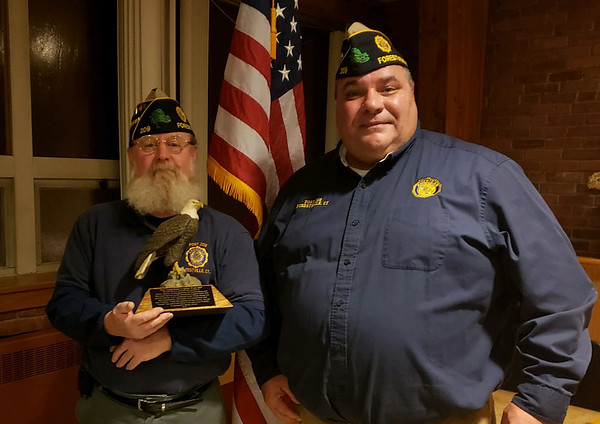 BRISTOL - Forestville American Legion Post 209 has presented Bruce Barton with its inaugural Legionnaire of the Year award and Robert Getz with its Community Activity Award.

“On behalf of the American Legion Post 209 I am proud to present these awards to two outstanding legionnaires,” said post Commander Brian Avery. “They donate their time and energy to their community and offer their support to the Legion in making Bristol and our state a better place to live. They represent what the Legion stands for: patriotism, God and country, and they work very hard in supporting these values.”

Avery said that both Barton and Getz’ wives also volunteer with the Legion auxiliary and that Getz’s grandchildren are members of the Sons of the American Legion.

“They get the whole family involved,” said Avery. “If I could clone them and get 100 of them then our post would be doing amazing things.”

Barton, who is the post’s historian, has received the post’s first Legionnaire of the Year award for “outstanding service to the American Legion and to the community and country,” said Avery.

“I didn’t think I was doing anything spectacular, so I was a bit astounded to receive this award,” said Barton. “I did my duties as a historian - keeping a log book and taking pictures and volunteering at events. Being retired I suppose I have more time available than the average fellow. It’s an honor to receive the post’s first Legionnaire of the Year award, though we are still a young post.”

As for his service to the country, Barton said he served in the Navy from 1968 to 1972 and that he is a Vietnam veteran. He left the service with the rank of Aviation Ordinance Second Class.

“I served in three combat cruises to Vietnam with my squadron,” said Barton. “In layman’s terms, my duties were loading bombs onto airplanes before they took off from the flight deck.”

Getz, who is the treasurer of Post 209, was also given the “Community Activity Award” for “outstanding and devoted service to the American Legion.

The post originally met at Asbury United Methodist Church but moved to Gloria Dei Lutheran Church at 255 Camp Street in September of this year.