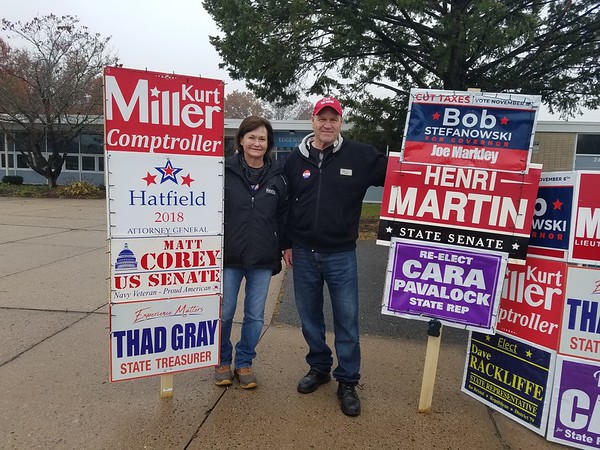 Francine and Jake carrier were under the rain outside of Edgewood School holding posters in support of the ir favorite candidates. Karla Santos | Staff Buy this photo

BRISTOL – Residents were impressed by the amount of people who were out voting in Bristol despite the rain and long lines on Tuesday’s midterm election.

Voters said that at Edgewod School they had to wait between 20 and 45 minutes to vote because of the long line. Older and disabled people, however, were accommodated and given their ballots outside the line to avoid having to stand up for a long time.

Jake Carrier and Francine Carrier were outside the school, under the rain, holding posters in support of the candidates of the Republican Party.

Jake Carrier has lived in Bristol since 1971 and he said he is a foreigner who came to the country to follow the American dream.

“The reason I’m here today is to try to keep the American dream going for my grandchildren,” Carrier said. “I support the men that I feel will save Connecticut from a fiscal cliff. Bob Stefanowski is fiscally responsible and has a long life time to prove it. Henri Martin and the whole group of Republicans, they are the ones who are the most fiscally responsible. They don’t spend more money than we have.”

Lisa De Sousa, of Bristol said despite being pregnant, she is glad there was a long line.

“It just means the turnout is big which is amazing,” De Sousa said. “I think that this is awesome to see such a good turnout for midterm elections that don’t tend to get as much activity as the bigger presidential elections. I voted blue across the board. I think if you want to change what’s happening on the national level, you have to change it in your local community first and those are the candidates that are going to help push for the bigger picture to change.”

Dina Mazzone, moderator at Chippens Hill Middle School, said that by 11 a.m., the school had received over 30 percent of voters.

“At 6 o’clock we had a line out the door and down the sidewalk,” Mazzone said. “It has been steady ever since. There are a lot of young voters coming in, which is great to see.”

John Letizia is a former chair of the city’s finance board. He said he has never seen as many people at an internal election.

“I’m impressed with Stefanowski primarily because Ned Lamont I think would be a duplication of Malloy,” Letizia said.

The city of Bristol registered 80 voters as of noon on Tuesday.

Karla Santos can be reached at 860-801-5079 or ksantos@centralctcommunications.com.

Polls opened at 6 a.m. in Connecticut and so far voter turnout has been steady locally.

Check back throughout the evening for updated results. Polls close at 8 p.m.