Justin Muszynski | Staff Sammy Vasile, co-owner of South Side Meat Market, talks with Ned Lamont during a campaign stop in Bristol on Friday. Buy this photo 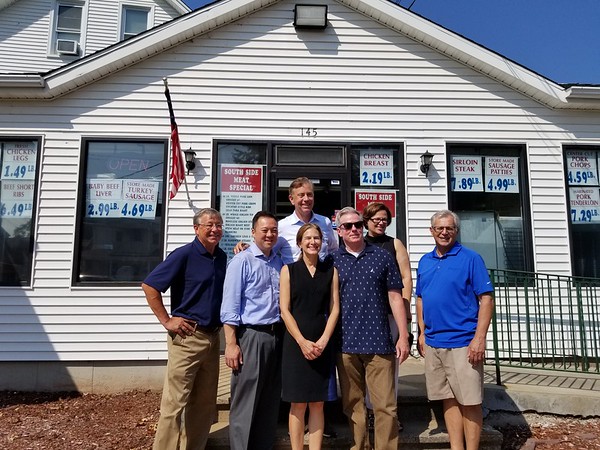 BRISTOL - Just days ahead of the primary, Ned Lamont and Susan Bysiewicz made a campaign stop in the city’s West End Friday to meet small business owners and exchange pleasantries.

“When I’m governor, I’m gonna come back,” Lamont said, standing inside South Side Meat Market while he asked the owners about their business.

Lamont and Bysiewicz are hoping to punch their ticket on Tuesday as the Democratic candidates for governor and lieutenant governor, respectively.

“We’re three and a half days from an important primary, and we’re about 90 days away from a really important election that will say a lot about cities like Bristol,” Lamont said in a brief interview with The Bristol Press.

Republicans, Lamont continued, want to eliminate income tax. That method, he believes, will hurt municipalities and drive up property taxes.

Lamont and Bysiewicz on Friday took a small tour of the West End, along with fellow Democrats William Tong, who is running for attorney general, state Rep. Christopher Ziogas, Bristol Mayor Ellen Zoppo-Sassu and city councilmen Peter Kelley and David Preleski. They met Michael Vallee in his Vallee’s Guaranteed Shoe Rebuilding shop, which has run out of its West Street location for 15 years, and the owners of South Side Meat Market.

“People come from all over to get their shoes shined, buy their meats and get a pizza,” Zoppo-Sassu continued, while buying steaks from South Side Meat Market.

The conversations between local business owners and the gubernatorial primary candidates were much less political than Lamont’s statements about taxes and very cordial. He asked South Side owners about things like where they get their meats from and their favorite baseball team.

“This is awesome,” Bysiewicz, who served as Connecticut’s secretary of the state from 1999 to 2011, said while perusing the market’s peppers, meats, macaroni salads and other products.

“Can you open one of these in Middletown?” she asked South Side co-owner Sammy Vasile, referring to her hometown.

“It’s businesses like this that provide stability,” Zoppo-Sassu said.