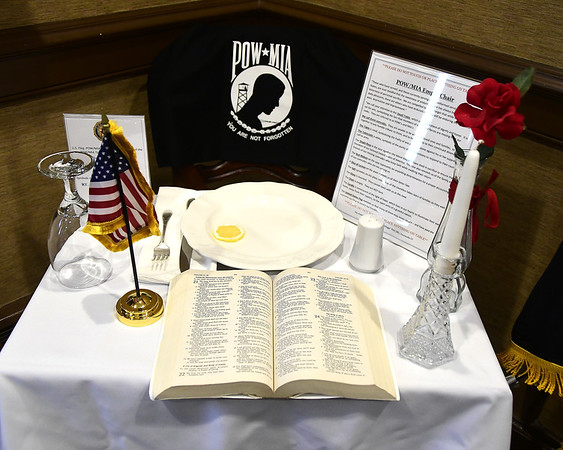 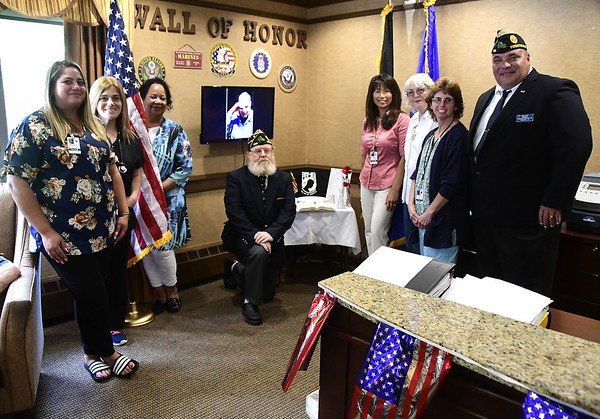 BRISTOL - ‚ÄúWe call your attention to this small table, which occupies a place of dignity and honor. It is set for one,‚Äù said Chuck Woodin, founder of American Legion Post 209 in Forestville.

During the ceremony, Woodin explained the symbolism of each item set at the table for the comrades who are missing from the ranks and are referred to as Prisoners of War and Missing in Action.

‚ÄúThe table is small, symbolizing the frailty of one prisoner. The tablecloth is white for the purity of their intentions to respond to their country‚Äôs call to arms. The single rose in the vase signifies the blood they have shed in sacrifice. The red ribbon on the vase represents an unyielding determination for a proper accounting. A slice of lemon on the plate reminds us of their bitter fate. The salt that sprinkles reminds us of the countless tears of families as they wait. The glass is inverted; they cannot toast with us at this time. The chair is empty; they are not here. The candle is reminiscent of the light of hope, which lives in our hearts to illuminate their way home. The United States flag reminds us that they may never return and have paid the supreme sacrifice to ensure our freedom,‚Äù said Woodin.

‚ÄúIt‚Äôs important to see veterans and know that people are concerned for them and that they‚Äôre still remembered,‚Äù Livigne said.

Levine, who served as an Army surgical nurse in 1969, said the ceremony was excellent.

‚ÄúThe wall honors all the branches. It unites us and puts us all together,‚Äù Levine said.

Young Crandall, the executive director at Village Green, was honored to present this token to their residential veterans.

‚ÄúWe wanted to make this lobby a welcoming atmosphere, especially for our veterans. Now our residents and other guests can take a moment and appreciate all the sacrifices and services our veterans have done for this country,‚Äù said Crandall.

‚ÄúThis is something that Village Green has been asking for, for many years,‚Äù said Avery. ‚ÄúWe wanted to keep true to our word, and it is with great pride and pleasure to present the Wall of Honor. We respect, honor and love our veterans.‚Äù

‚ÄúThere was a great deal of work put into this project and it came out excellent. We never want to forget tradition,‚Äù said Barton.