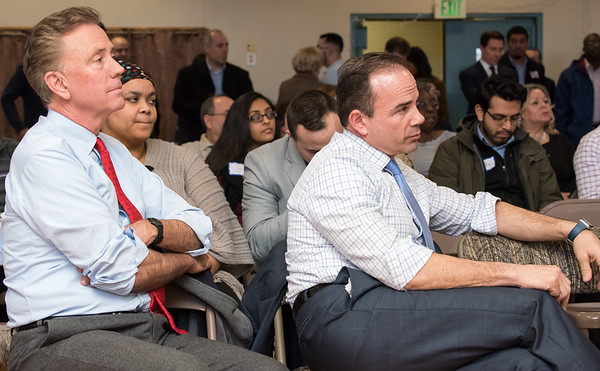 03/15/18 Wesley Bunnell | Staff Candidates for governor Ned Lamont, L, and Joe Ganim listen to fellow speakers at the Pulaski Club on Thursday evening during a meeting for Democratic candidates for state office to meet with the Democratic Town Committee as well as area residents. Buy this photo
Published on Sunday, 18 March 2018 20:14
Written by Skyler Frazer

NEW BRITAIN – Democrats in the city were visited by candidates for statewide office Thursday evening during a meet and greet hosted by the Democratic Town Committee.

Six candidates for governor, or those at least exploring runs, converged on the Pulaski Club to pitch their platforms to potential voters.

“The winds are blowing our way. The Democratic party is looking good,” DTC Chairman Bill Shortell said at the beginning of the session. “We’re still energized from our strong campaign in November when we took the city council.”

Susan Bysiewicz, former Secretary of State from 1998 to 2010, is exploring a run for governor. Bysiewicz touted her record of winning election in the state as a reason she believes she’s a strong candidate.

“We need to win. I am the only candidate, among those running for governor or exploring, that has won three statewide elections by large margins,” Bysiewicz said.

Joe Ganim, mayor of Bridgeport, announced his candidacy for governor in December. Ganim said he has a unique skill set to lead Connecticut forward.

“We’re missing budgets by $2 billion year after year, and without casting blame, this has to be fixed,” Ganim said.

Luke Bronin, mayor of Hartford, is exploring a run for governor. Bronin alluded to New Britain’s ongoing debt restructuring debate, and how he resolved the issue in Hartford.

“I saw a city that was also making some big mistakes, doing things like pushing out debt payments to the future, you guys may know something about that,” Bronin said to the crowd, reflecting on why he ran for mayor of Hartford.

Guy Smith, a businessman from Greenwich, said his lack of political experience is attractive to voters.

“I bring something a little different, a little unique, among the candidates and that is my three-tiered experience of military, of corporate experience and business school experience and of state and executive agency experience,” Connolly said.

“I am fundamentally somebody whose ready to come in there and shake up the way we do business,” Lamont said. “We are the party of change, we’re the party whose looking forward.”

Shortell said the DTC will host another candidate meet and greet following the party’s primary August 14.

Republicans in the city will have an opportunity to hear from their party’s candidates for governor next month when the Connecticut Republican Party hosts its fifth gubernatorial debate. The debate will be at 6 p.m. on Wednesday, April 4 at New Britain High School. Tickets are $10 and can be purchased online.

Skyler Frazer can be reached at 860-801-5087 or by email at sfrazer@centralctcommunications.com.

The New Britain DTC was also visited by candidates running for attorney general, secretary of state and treasurer.