New brewery and pizzeria to share space in downtown Bristol 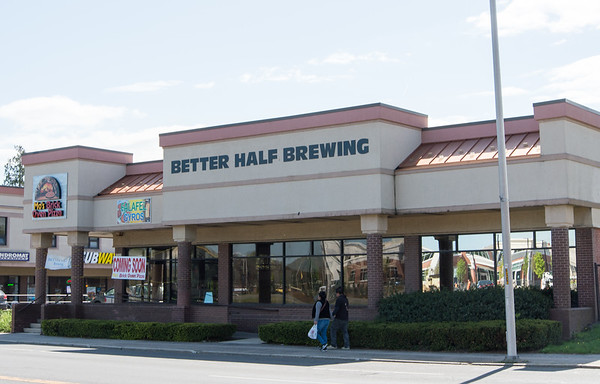 Wesley Bunnell | Staff The future home of Better Half Brewing and Mo’s Brick Oven Pizza on North Main Street in Bristol Buy this photo
Published on Monday, 6 May 2019 21:27
Written by SUSAN CORICA

When the Better Half Brewery and Mo’s Brick Oven Pizza open in a few weeks, customers will be able to walk in the door at 59 North Main St. and order food from one business and beer from the other, and enjoy them at the same table.

Rachel and Michael Haseltine are working on getting the brewery going in their half of the old CVS building, while Mohamed “Mo” Ibrahim is installing the brick oven in his half.

The space is almost 9,000 square feet, said Rachel Haseltine. “Our working space is about the same. We share the storage space, the bathrooms, and all the common area. It has really worked out great for us, and we’re loving the partnership.”

Ibrahim said both businesses will open the same, “hopefully June 1.”

He has been running the Center Deli Market on Center Street, and first had the idea to open a restaurant in the old CVS. Then Better Half came along and they decided to share the space, he said.

“It will be something new,” he said, explaining that his business will offer Mediterranean and Middle Eastern dishes like gyro and falafel in addition to pizza.

The Haseltines had originally planned to open their brewery in the old Bristol Press building, 99 Main St., last summer before switching to North Main.

Then late last year, Better Half was delayed by the partial government shutdown in getting their license to brew and serve beer to the public from the federal Alcohol and Tobacco Tax and Trade Bureau. However, once the shutdown ended and the license was approved in January the process has been going smoothly.

“We’re doing good, we are trying our best to be open as soon as possible,” Rachel Haseltine said. “As much as we would love to be able to open in May, we have to cross our t’s and dot our i’s and make sure we do everything the right way.”

“Mo has been a great partner with us,” she said, “He is pretty business savvy, which has been great helping us out. It’s one big facility, as soon as you walk in the front doors you will have the beer and the pizza in there, and we will share all the tables.”

“He has a gorgeous brick oven for the pizza, he had to get pieces for it from Italy. I think we had to do a lot more work in the beginning,” she said, noting that the brewing equipment is heavy and required cutting trenches in the floor.