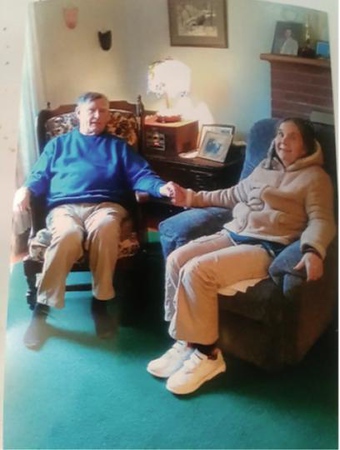 Tom Doyle, shown here with his wife, Nancy, when they celebrated their 50th anniversary earlier this year, is unofficially the last schoolmaster in Bristol. Back in the old days of single classroom schools, the head guy was the schoolmaster and was the lone adult left, the maintenance man, parking lot snow removal person and what have you.

Earlier in his career, Tom was that person at the South Chippens (Chippins) Hill School, before it closed. Now it’s being used for three or four housing apartments. It’s located next door to the firehouse on Hill Street and it closed down as an educational building in the vicinity of 45-plus years or more ago.

That’s a Popeye’s location being built next to Taco Bell on Rt. 6 as you head toward Plainville. There’s also a new convenience store on the right on Pine Street just before the Plainville line.

I’m told there was a lipstick manufacturer in this area in WWII. Can anyone verify this?

The lone birthday my crystal ball shows me for today is that of Susan Lauzon Maher. I’ve received some photos of mum displays from readers, but can’t show each one. I will post the winner eventually, though. Thank you for your participation

Tim Gamache sent me an email about a dancing instructor – ballroom especially – that taught at South Side School back in the day and asked if readers remember her. Well, I recall back in the 1950s when she later taught at Stafford School.

I recall taking lessons there and it was around the time that it was announced Buddy Holly and other famous early “rockers” had just perished in an airplane crash. I’ll never forget hearing that at the dance lessons that day and walking home to Brookside Drive bewildered that such talents were the news of the day.

Anyways, does anyone have a remembrance and sessions of this talented dance instructor? I know I had two left feet. No comment on Tim’s ballroom prowess.

1: Mike Nestico saw the pickleball segment in Friday’s column and advised me that his son, David, is very involved in the sport. He’s in Guilford and is an ambassador for the USA Pickleball Association and I am informing Cheryl Yetke, one our “picketballers,” of his contact information.

2: Can any of our pickleball players name an All-Bristol 2020 team? I’m thinking Marty Hurwitz would be a good manager and if he’s good enough he could be the player/manager for this elite group.

I met Richard Zack yesterday for the first time while we were in a line waiting at Quest and we found out we are living in the same neighborhood. We talked about the street he lived on, Metro Street, and he said it was named after the late Metro Komanetsky, who owned a lot of property in that area.

Before he left, Richard, who is originally from Plainville, told me that Zack Road was named after him. His father-in-law, William Robert Cloos, built the street and decided to name it after Richard.

One of our readers is hoping I can do some “bits” on the former Bristol Inter-Church Basketball, or whatever the official name of the circuit was. Of course, Edward “Eddie” Vaughan oversaw the league and I’m sure he can email me some comments. Also, anyone have a photo of the action there or of a team. They had some good players who were or were close to varsity high school talent.

The first low-priced sewing machine was invented and patented by Bristol’s Wilfred Nettleton and his machinist, Charles Raymond. It was first manufactured out of Brattlesboro, VT and sold for $10 each.