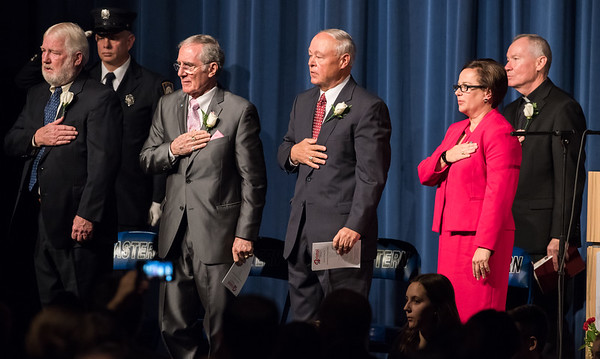 Wesley Bunnell | Staff Zoppo-Sassu stands with former Bristol mayors during the recitation of the Pledge of Allegiance. Buy this photo 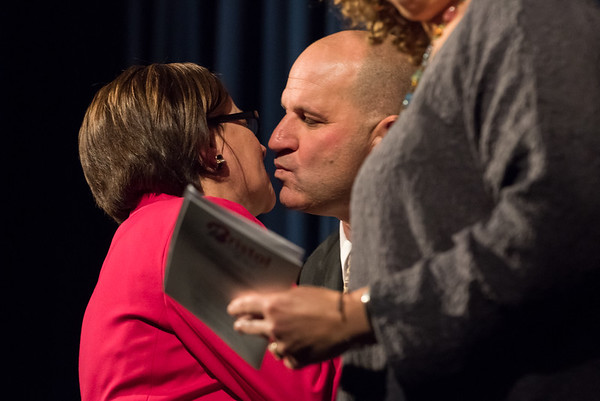 Wesley Bunnell | Staff Mayor Ellen Zoppo-Sassu, with her hand on a family bible, takes the oath of office Monday night. Buy this photo

BRISTOL -- Mayor Ellen Zoppo-Sassu announced her intention to seek re-election at Tuesday night’s meeting of the Bristol Democratic Town Committee. She was elected to her first two-year term in 2017.

“Since taking office, we have been able to put Bristol on the path to success,” Zoppo-Sassu said. “We are seeing development on Centre Square and throughout downtown. We have decided on a direction for the Memorial Boulevard School, saved the theater, and procured state aid to pay for the project.”

In addition to the activity downtown, she also listed a series of economic development projects happening across the city, including the new Amazon fulfillment center and high-tech manufacturing firms within both industrial parks; as well as establishing workforce development partnerships between educators and local service providers like the Central Connecticut Chambers of Commerce and the American Job Center at the Tunxis satellite campus.

Zoppo-Sassu also cited her administration’s continued efforts to fight blight and hold landlords accountable for the properties they own in Bristol, as well as her efforts to combat the opioid crisis.

“By aggressively tackling blight, working to end homelessness, and addressing the opioid crisis head-on, we are actively making our neighborhoods cleaner, safer, and more valuable,” she said.

“I am proud of the strides we have made in the financial arena,” she continued, “including stabilizing the City with the pension reorganization plan, which will save the taxpayers $50 million over the next 20 years.”

“We have eliminated seven positions; merged the Water and Sewer divisions to reduce duplicate administrative functions; and created shared services between the City and the Board of Education,” she said.

“Strong working relationships with the unions has four contracts settled, one awaiting a ratification vote, and the fire and police contract negotiations are almost done,” she said. “To date, this has been done without the time and money needed for arbitration. The City will also be transitioning to a less-costly health care plan and a reduction in the way pensions are calculated for future employees.”

According to Zoppo-Sassu, the total savings for taxpayers due to these efforts could be in the tens of millions over the next few decades.

“I believe in leveraging scarce and dwindling resources through collaboration with community partners, employees, and citizens, and saving money for the taxpayers,” she commented. “This is a hard-working City Council and I have been very fortunate to have this level of support and buy-in. We are all aware that the citizens are tired of political fighting and posturing. We have been successful because we have worked together and put Bristol first.”

“We should feel good about the progress we've made, but we should feel even better about all of the exciting opportunities ahead,” said Town Committee Chairman Dean Kilbourne.