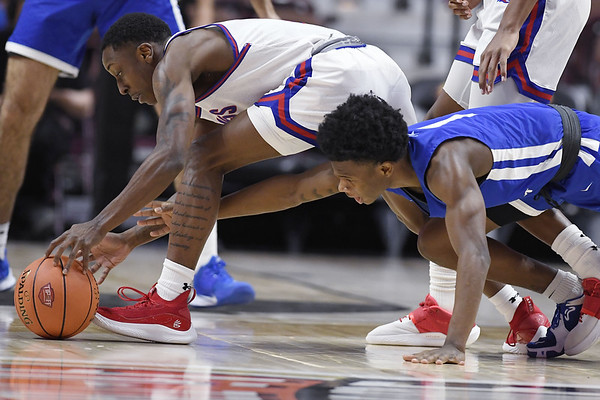 NEW BRITAIN – The Central Connecticut State men's basketball team fell in double overtime to Fordham, 89-83, on Sunday in its home-opener at Detrick Gymnasium.

The Blue Devils tied the game late in regulation and once again as time expired during the first overtime, but it was the Rams who came out on top in the non-conference matchup.

“Double overtime, I told these guys in the locker room, I give them a lot of credit for the heart and fight to stay in it,” CCSU head coach Patrick Sellers said. “It's the same thing that's been happening over and over. We come out in the second half and we come out flat and lethargic. Our defense was bad and our offense suffers. We dug ourselves into a deep hole and then we fight our way back. I give the guys a tip of the hat for fighting our way back and forcing overtime.”

Ahead 32-28 at halftime, the Blue Devils were outscored 34-30 in the second and needed a layup from Jayden Brown with 1.3 seconds left to extend the game. In overtime, a 3-pointer from Ian Krishnan pushed the contest to a second OT period at 75-75, before Fordham earned the victory with 14 points in the final frame to CCSU's eight.

Krishnan led the Blue Devils with 17 points with 7-for-16 from the floor and 3-for-10 from beyond the arc. Zach Newkirk (13 points), Nigel Scantlebury (11 points) and Brown (10 points) finished with double-digits in scoring. Brown also tied a team-high seven rebounds with Andrew Snoddy and Scantlebury matched with Davonte Sweatman with three assists.

The Rams were led by Antonio Daye Jr. and Darius Quisenberry who combined for 52 points, with 20 points between the pair in both overtime periods.

Neither team held a large advantage over the other on the stat sheet when it was all said and done. Fordham shot 46.7 percent from the field to CCSU's 42.3 percent, however the Blue Devils led in 3-point percentage (28-26.9) and free-throw percentage (83.2-78.8).

The Rams did score 29 points off the rush compared to CCSU's nine, but the Blue Devils' bench outscored Fordham's 24-0.

Sunday's post-Thanksgiving showdown was the first meeting between the two schools in five years. The Rams won the last game, 83-60, in 2016 on its home court.

Fordham pushes the series record to 3-1 with the victory and its overall record to 5-3.

The loss spoiled Sellers' first game back at Detrick as head coach 30 years after he graduated and about 20 years since he last coached with the Blue Devils.

“It felt natural, it felt like I didn't leave,” Sellers said. “I just remember coming out here, number 21, playing back in 1987-88. It felt good to be back and hear the fans and hear the music and hopefully we can get a bigger crowd when students come back to campus.”