With nothing to lose, CCSU takes on scuffling and battered Miami 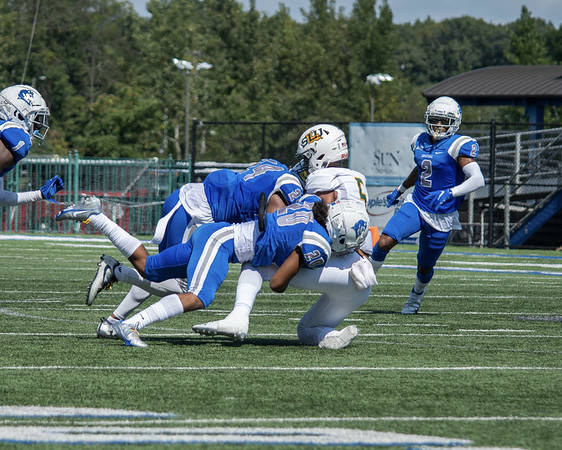 NEW BRITAIN - Central Connecticut football is headed to Florida this week in an effort to get back in the win column against University of Miami (1-2) Saturday afternoon.

Kickoff for the Blue Devils and Hurricanes comes at 12:30 p.m. on ESPN3. The excitement for the FCS Blue Devils has been plentiful as they go up against an FBS school in the Hurricanes.

"I would say it hasn't taken much motivation from my end to get these guys excited to play this game. ... The kids knew about this game for a long time," said CCSU head coach Ryan McCarthy. "... The demeanor has been really, really good. We played a really good football team last week and obviously the score was very one-sided. ... Right now, weren't playing good football, we're not playing great football to be honest with you. ... It's been pretty easy to get them motivated for practice this week."

Coming off a crushing 56-10 loss to Southeastern Louisiana, the Blue Devils find themselves under .500 again at 1-2.

"There is nothing to lose. That is 100% the truth. The pressure is entirely on them," said McCarthy. "I know they're going through some pains right now, opening with the best program in the country (No. 1 Alabama) and got blown out, then lost a really close game to Appalachian State. ... The speed of the game from game one to last weekend was very different. ... I've seen they've had issues on both sides of the ball with assignments and things I'm sure (Miami head coach) Manny Diaz is trying to address."

Diaz, for Miami, has been a hot topic as of late in terms of his status going forward with the program.

There is heavy speculation surrounding his employment with the program following this week, with many sources believing his exit from the program is likely should Central Connecticut come into Miami and beat the Hurricanes. Diaz is coming off a 2020 season where he finished 8-3 with Miami, losing his Cheez-Its Bowl game to Oklahoma State.

Before that, he was 6-7 with a loss in the Independence Bowl against Louisiana Tech.

"I'm sure he's probably not in a good place right now, for a variety of different reasons," said McCarthy. "... You don't know what you're going to get. We're a 1-2 football team right now and we've got to get this thing turned around, and that goes for both sides."

More uncertainty surrounds the Hurricanes with D'Eriq King currently listed as doubtful for Saturday's contest. The dual-threat quarterback had a breakout season in 2018 at University of Houston before suffering a knee injury, leading to a redshirt 2019 season. His transfer to Miami was a second chance for him, which he capitalized on with a 2,300-plus yard passing and 24 all-purpose touchdown season for the Hurricanes in 2020.

Now, without over five years of film to prep the defense, McCarthy and company are getting a new look at what the Hurricanes offense will look like.

"Whoever they put out there, it's going to be a four-start recruit or a kid that's obviously got a high level of talent. Are they going to be D'Eriq? I think they are. (Tyler Van Dyke), he's from Glastonbury (Connecticut). I remember watching him at Suffield Academy and he's a very talented kid. I think he's more of a pocked passer."

McCarthy cited protection issues and potential communication breakdowns on the perimeter has led to King "running for his life" on the field early in the season. Should Van Dyke start, he will bring eight snaps of experience to the field.

The other quarterback in question, Jake Garcia, is a true freshman who has not seen time yet.

Defensively, the Blue Devils have been working through tightening up the secondary and trying to put pressure on the quarterback after generating little to no pressure last week.

Last week the Blue Devils allowed 571 yards of total offense, the most in a game this season, against a team McCarthy gave credit to having one of the best offenses in the country.

"We're built to stop the run and when we face teams that like to put the ball in the air, and that's what Miami is going to do," said McCarthy. "... I think that's obviously where we'll be tested. We didn't generate any pass rush last week, whether it be not getting home with blitzes or not executing a lineman or hitting our spots. That's got to happen. ... I think we need to tighten up and it always starts with us, alignment and assignment. We get those things squared away we'll put a better product on the field last week on defense."

Entering Saturday's tilt Ty'shaun James and Aaron Dawson will return to the lineup as it gradually nurses back to 100%.

With Miami being one of the most high profile teams the program has faced in some time, and is the first FBS school since facing Eastern Michigan in 2019, the Blue Devils are taking the opportunity as a chance to see where they're at as a team, understanding that it will take a perfect game to come out on top.

"You've got to swing with the big boys. That's what you need to do to get a real indication of where you're at," said McCarthy. "I had a pretty good indication of where we're at based off last week's game. ... We're going to have to play close to a flawless game to win, and the preparation has not changed. ... We approach it with the same mindset, putting our kids in the best position to win and ultimately what has to happen is that our kids need to go out and make plays and avoid the mental mistakes."