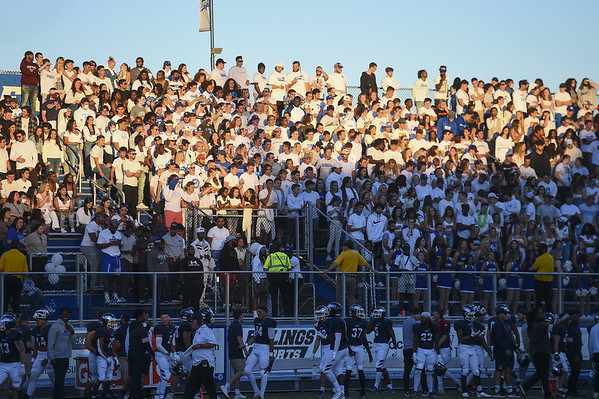 NEW BRITAIN - About 4,500 people packed into Arute Field Friday night to watch a renewed rivalry between Southern Connecticut (1-0) and Central Connecticut (0-1) to kick off the college football season.

Despite having the advantage in most statistical categories, Central's efforts weren't enough to beat Southern, falling 28-21 in a surprising final that had the visiting crowd chanting and celebrating before the final was official.

The first contest played by the Blue Devils in New Britain since 2019 wasn't exactly how they wanted to welcome fans back. But, nonetheless, the excitement of a full stadium and loud fans was a welcome sight.

"It was great. The crowd was great and they were into it," said head coach Ryan McCarthy. "Southern's fans were into it too. It felt like a resemblance of normalcy again, but obviously the end result wasn't what we were hoping for."

The Blue Devils didn't have the lead at any point in the contest, but held the game even at 7-7 and at 14-14 before a 90-yard interception was returned for a score by Southern.

A 41-yard touchdown reception by Ty'shaun James in the fourth quarter cut a then-two score game down to one. CCSU had a chance to extend play with the ball in their own half of the field with about a minute remaining in the contest, but the Blue Devils couldn't even up the score with a turnover on downs, leading to the final.

Scoring Friday night was Kenyata Huston, Everett Wormley and James, each of whom had receiving scores. Romelo Williams passed for two touchdowns before subbing out for Shon Mitchell due to injury. James' receiving score came from Mitchell.

Losing the home opener wasn't due to lack of talent or energy as much it was Central not capitalizing on opportunities, and for McCarthy, he feels the coaches are responsible.

"I think this is a team that really enjoys playing football," said McCarthy. "... It's not a lack of effort, it's a combination. We did not make enough plays when it matters, and that also falls on the coaches. ... There was a lot of miscues. I've got to give Southern Connecticut all the credit. They deserved to win that game."

Southern was led by Izaia Sanders' 109 receiving yards and one touchdown. Jack Ostrowsky had three passing scores for 277 yards and two interceptions.

Picking off Ostrowsky was Dexter Lawson and CJ Duell.

Wagner was routed by University of Buffalo Thursday 69-7 for a season-opening loss.