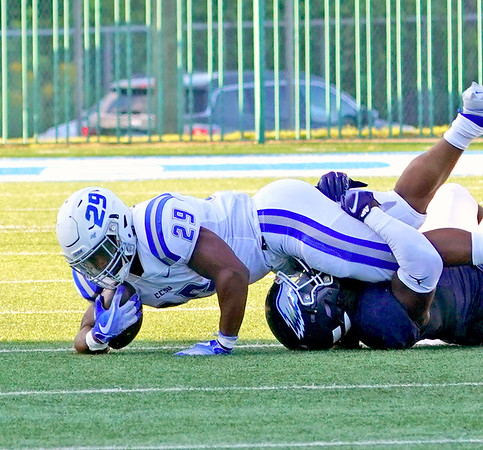 The loss for the Blue Devils comes as a shock, with SCSU being ranked seventh in the NE10 preseason rankings. Central was ranked second in the Northeast Conference rankings entering Friday.

When it came down to it, though, CCSU’s Ryan McCarthy said a better-coached Southern team had the upper hand on Friday.

“We didn’t know what to expect,” said the head coach. “… I think it was a matter of they played better, and their coaches coached better. That’s what it comes down to. Obviously I didn’t do enough things for our team to get them ready to play and win a game. It wasn’ t that our kids didn’t play hard, … I have to give Southern Connecticut all the credit.”

The Blue Devils struck first getting a 42-yard touchdown rush from Kenyata Huston. The score, following a holding call that would have put the Blue Devils on the 20-yard line, backed them to the 42 for second and 10.

The run along the far sideline had Huston weaving through the defenders, all chasing him to the end zone.

The score was the biggest play by yardage in the quarter, and was the only scoring play of the quarter. Entering the second quarter, both sides found the end zone with more frequency.

With the Blue Devils in the midst of a potential scoring drive, the ball was popped out of the bands of a check down receiver after a short roll out pass. Southern pounced on the ball, getting the turnover.

A wide open Tyler Papallo caught a pass from Jackson Ostrowsky for a massive gain, putting Southern in the red zone on the 15. Ostrowsky then found Tim O'Shea on a slant route across the middle for the 15-yard score to tie it up.

After trading stalled drives, Southern again caught a break on a botched snap on a Blue Devils punt inside its own red zone.

Recovering the ball after the failed punt put SCSU on the +19-yard line. The first play from scrimmage, Ostrowsky found Tye Hodge wide open for the score.

A successful extra point made it 14-7, the first lead of the game for Southern.

McCarthy remarked that a game typically has anywhere from five to seven big plays that can swing a difference in contests, and Southern had the upper hand in that department.

“Any game, there’s probably five to six plays that determine a game. They seemed to make all of those plays,” said McCarthy. “… I think guys in the wrong spot, that’s usually the culprit. We knew they were going to let it all loose, cut it loose, and play with reckless abandon. … We were looking in the wrong spots.”

CCSU’s answer came just before the half, with a 33-yard reception to Ty’shaun James giving the Blue Devils an opportunity inside of 10 yards with time dwindling in the half.

After a failed rushing attempt and a spike, a delay of game backed up the Blue Devils to the 13 with 19 seconds left. Romelo Williams found Everett Wormley for the score, getting some blocks after the catch to scamper in with 11 seconds left.

Exiting halftime the score was 14-14, and with the Blue Devils receiving the ball, they had a chance ro give themselves the lead again.

The opportunity never came as Southern and Central traded stalled drives, neither scoring despite turnovers in the third quarter.

Kyle Zajack picked off Ostrowksy for the first interception of the season for the CCSU secondary, but it led to nothing from the offense.

With CCSU driving in the fourth quarter the Blue Devils were on their way to a scoring drive, but back-to-back false starts after getting inside Southern’s 20 pulled the Blue Devils out of potential scoring range.

Following both flags, a Romelo Williams throw under pressure was jumped by Richard Williams Jr., who took the ball 90 yards the other way for the go-ahead score.

The touchdown sucked the life out of the Blue Devils, who were chasing Southern the rest of the night. A deflected pass near the midway point of the fourth quarter was caught by an unintended Southern receiver, who then took it to the house from 51 yards out.

Now down 28-14, and needing to capitalize quickly, Central went for it on a do-or-die 4th and 1 and converted. The play set up an opportunity for Shon Mitchell, who was subbing in for Williams, finding James across the middle deep for the 41-yard score.

Mitchell finished the night 4-for-8 in passing with 54 yards and a score. Williams finished 24-for-38 with 279 yards with two passing scores and 49 yards gained on the ground, which was the team-high. He was subbed out for Mitchell in the second half after “getting his bell rung” as a precaution

It was the final scoring play of the game as Central took over on offense with a little over a minute left to play, and couldn’t make any magic happen, turning it over on downs with 1:12 remaining.

The Blue Devils racked up 445 yards on offense to Southern’s 290. Perhaps the most noticeable on the stat sheet was the penalties and yardage against for each team.

For Southern, it had seven penalties and 58 yards. Central had 15 penalties for 147 yards. The amount of penalties and yards against noticeably hurt the Blue Devils all night when it came to trying to put together a clean drive, especially while trailing. McCarthy said it falls on him for the team’s lack of discipline.

“I don’t know what the official count was on the amount of flags, but if you’re sitting in the stands watching the game, it was a lack of discipline,” said McCarthy. “It’s discipline, no matter how you look at it, and that falls to me.”

Central had two interceptions from Zajack and Jhalil Brown, combining for 38 yards returned. The Blue Devils had no sacks, four passes broken up and three combined tackles for a loss for a total of seven yards.

Leading in receiving was James with eight catches for 75 yards.