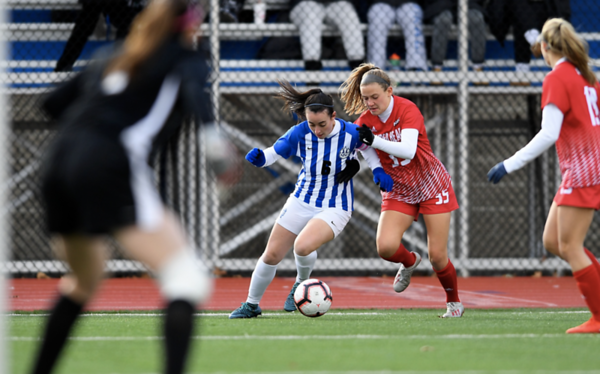 Roma McLaughlin (6) battles for the ball against a Sacred Heart defender in 2019. | CCSU Athletics Buy this photo
Published on Sunday, 29 August 2021 20:32
Written by TYLER HETU

The score came in the 93rd minute of competition from just outside the box, sneaking inside the goal post for McLlaughlin’s second of the season and 18th of her career.

UNH’s equalizer by Fran Picicci in the 81st minute sent the game to extra time before the game winner. Erica Bardes’ first goal of the season in the 11th minute gave CCSU the advantage early.

The win for the Blue Devils is the second this season and second in as many games. The Blue Devils outnumbered UNH in corner kicks at 3-1 and were even in shots with nine each. Caitlin Murphy had four saves in the win for CCSU, her first of the season.

Colgate is next up, and is the third team in CCSU’s four-game home stand. Kickoff against Colgate will come at 1 p.m. in New Britain.