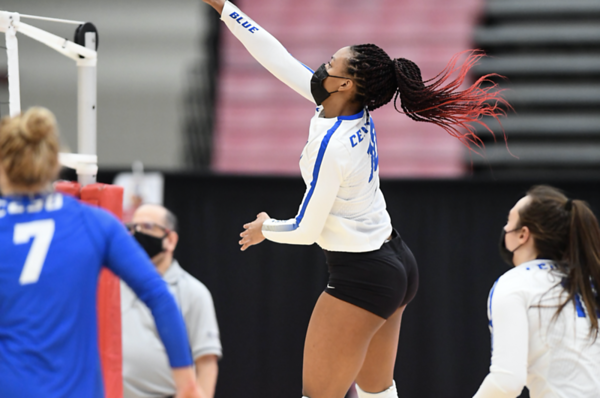 COLLEGE PARK, Md. - A winless road weekend to open the 2021-22 season for Central Connecticut State University volleyball will bring the Blue Devil women into September with an 0-3 record. The Blue Devlils suffered a 3-2 loss to Hostra, a 3-0 loss to Maryland and a 3-1 loss to Virginia at the Maryland Invite across two days.

CCSU and Hofstra went to the limit on Friday to open the tournament, with Hofstra getting the best of the Blue Devils in the five set loss after they took a commanding two set lead to open the match.

The 68-point third set saw the leading score change hands 20 times. CCSU was one point away from the sweep but a kill kept Hofstra alive, leading to the shifting momentum.

From there, CCSU battled to get its footing back, but was unable to stop the Pride’s momentum. The Blue Devils nearly had control in the fifth set, but were two points short of a lead before the final.

Ashlyn Eisenga had 23 digs for the team-high. Nyjha Marcelin had 11 kills to lead CCSU.

Resuming play on Saturday, the Blue Devils took on Maryland, who was coming off a 3-1 win against Virginia. The Blue Devils came out nearly taking the first set, coming within a point of a 1-0 advantage, but the Terrapins ran off a 4-0 stretch to take the set.

Marcelin led the team in kills (14) and blocks (5) against Virginia. Eisenga had 13 digs against the Terps, a team high. Maryland ended up going a clean 3-0 in the tournament.

In the second game of the day, the Blue Devils took on Virginia, who had a 3-0 win over Hofstra earlier in the day. The Blue Devils once again came out hot, this time leading through much of the first set against the Cavaliers. Ahead 22-21, the lead slipped away on a 4-1 run by Virginia to take the opening set 25-23.

In the second set the Blue Devils had the score within two, but fell 25-21. The third set saw CCSU steal one away from the Cavs, going on a 6-2 run to close out the third set 27-25 to force a fourth set.

A point-for-point showing in the fourth turned into a comfortable lead for Virginia after running off a 10-2 stretch. CCSU was unable to pull itself back, dropping the fourth set 25-20.

Against Virginia Marcelin, who was selected for the All-Tournament team, led the club with 10 kills. Isabelle Roufs had six blocks, a team high. Emma Henderson and Eisenga tied for the high in digs with nine.

The Blue Devils will be back in action Sept. 3rd when they take place in the UConn Challenge Tournament.