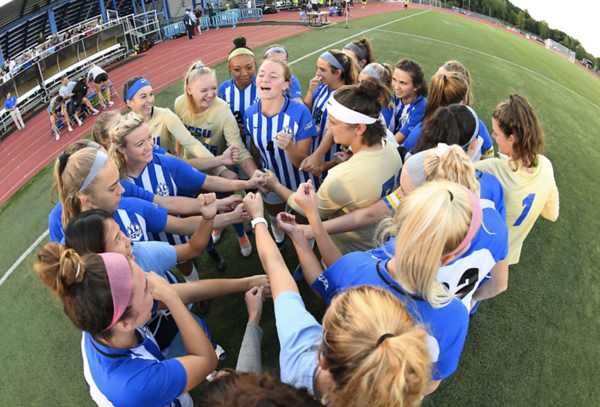 Central Connecticut women's soccer huddles up before a game in the 2019 season. | CCSU Athletics Buy this photo
Published on Friday, 27 August 2021 17:03
Written by MATT HORNICK

NEW BRITAIN - Following an eight-game season in the spring, the Central Connecticut State women‚Äôs soccer team will look to extend its three-year run of dominance over the Northeast Conference in a more complete fashion.

The Blue Devils played six regular season games last year, going undefeated against a series of NEC opponents with a goal differential of 15-1. A 4-0 win over Long Island University earned CCSU its third conference title in a row before it swept the postseason awards.

The Blue Devils hold a 1-1 record after two matches in the 2021 season, most recently taking a victory over Albany with a goal from Kelly Brady in the final minute of play.

‚ÄúWe‚Äôre definitely looking to keep our winning streak going,‚Äù junior goalkeeper Amanda McQuillan said. ‚ÄúHopefully [have] some clean sheets in the future because we had six out of seven clean sheets last year.‚Äù

Leading the way for the squad on the field will be junior midfielder Roma McLaughlin. She led the team in goals each of the past two seasons and earned third team all-American honors along with her second NEC midfielder of the year award and third selection to the all-NEC first team.

Anchoring the Blue Devils‚Äô defense will be McQuillan, the reigning NEC goalkeeper of the year, who did not allow any goals in six matches against conference opponents last year. The only scores against McQuillan last season came in the teams‚Äô 3-0 loss to South Florida in the first round of the NCAA tournament.

CCSU opened its 2021 campaign with a 2-1 loss to UConn on Aug. 21. McLaughlin netted the first goal of the game to give the Blue Devils the lead, but the Huskies answered back by halftime and then took the lead with 10 minutes left in the match to grab the win.

Central Connecticut returns to the pitch Aug. 29 to host the University of New Hampshire. The Blue Devils begin conference play Sept. 19 on the road against Mount St. Mary‚Äôs and finish their regular season Oct. 31 at home against LIU.

‚ÄúThere‚Äôs no rush to get to the finish line here,‚Äù D‚ÄôArcy said after the win. ‚ÄúWe‚Äôve got New Hampshire over the weekend, we‚Äôll get through that and then we start a fresh week again on Monday. Then we have two big games with Colgate and Oregon State. It‚Äôs a process and you don‚Äôt want to rush it. We‚Äôre in a good place now, this was a really good team win and I think we can build off this.‚Äù