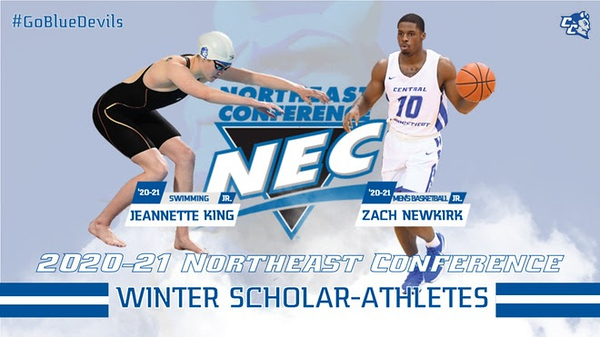 The announcement came from the league office. King, a member of the women’s swim and diving team, and Newkirk, a member of the men’s basketball team, were named scholar-athletes in their respective sports for the 2020-21 season.

The two were also named in the Winter Academic Honor Roll and the Commissioner’s Honor Roll.

King is a nursing major, posting a 3.80 GPA this past school year and was named Outstanding Swimmer of the Meet at the Northeast Conference Championships this past season. She won three events, the 50 free, the 100 free and the 100.

She was also a member of the gold-winning 400 free relay and the 400 medley relay teams.

A Dean’s List student, King has been recognized in both the NEC Commissioner’s and Academic Honor Roll. She also was a member of CCSU Athletic Director’s all-Academic Team and won the CCSU Student-Athlete Academic Award and was also earned the CSCAA Scholar All-America team recognition last fall.

He has been a Dean’s List student and a member of the CCSU Athletic Director’s All-Academic Team. He has also been the recipient of the CCSU Student-Athlete Academic Award.

On the court, Newkirk started in 15 of CCSU’s 21 games, averaging 22 minutes. He averaged 6.7 points per game and 1.9 assists per game. He was a 44.4 percent shooter from the field while converting 89.7 percent from the charity stripe. He had a career-high 20 points at LIU on Feb. 21.

All scholar-athlete award winners must have earned a minimum of 60 semester hours at their college or university, maintained a minimum cumulative grade point average of 3.20 and participated with distinction as a member of a varsity team.