Bardes, Rafter Recognized as NEC Fall Scholar-Athletes of the Year 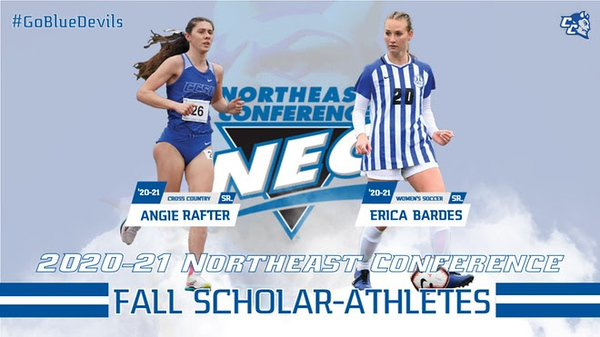 Bardes, a history major, posted a 3.96 GPA and repeated her honor as Women's Soccer Scholar Athlete from 2019.

The was a United Soccer Coaches Scolar All-America honoree, receiving third-team recognition. She’s one of six students at CCSU to receive the President’s Citation Award.

On the field, she was a two-time all-NEC first-team choice and a two-time United Soccer Coaches All-North Region pick for second-team. She was also a first-team all-region choice by the latter body after receiving a second-team nomination the year prior.

She was part of CCSU’s third straight conference title this spring, scoring one goal with three assists.

Rafter graduated this spring with a 3.96 GPA, majoring in English. She was recognized as the highest GPA for a graduating female student-athlete at CCSU.

A two-time NEC Most Outstanding Performer after winning the conference individual title in 2018 and 2019, Rafter helped lead the women’s cross country program to its third consecutive Northeast Conference title this spring. She took second at the NEC championship in a photo finish and was the NEC Women’s Cross Country Scholar-Athlete for the 2018-19 seasons

All scholar-athlete award winners must have earned a minimum of 60 semester hours at their institution, maintained a minimum cumulative grade point average of 3.20 and participated with distinction as a member of a varsity team.

The Commissioner's Honor Roll figure represents a 14.5 percent increase from a year ago.