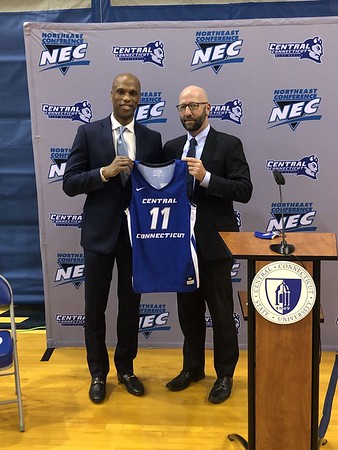 The press conference kicked off with interim athletic director Thomas Pincince explaining the process that led them to Sellers, saying it was a well-thought and difficult coaching carousel to navigate, and thinks Sellers will be the leader they sought.

“This is a job that generated a lot of interest from quality head coaches and assistant coaches throughout the country and the region. … I’m excited, honored and proud as we introduce our new men’s basketball coach this morning,” said Pincince. “When we began this process, we knew we needed a leader who would set the tone from Day 1. We knew we needed an individual who would work their tail off to restore the pride associated with our men’s basketball program.”

Pincince spoke on how highly recommended the former UConn, Creighton and Fairfield assistant was,

“During the process we made several hundred phone calls, … what we couldn’t find during every phone call was anyone to say a bad word about Pat Sellers. They did say these words – loyal, hardworking, student of the game, basketball junkie, diligent worker, friend, mentor, leader, grinder and one person went as far to call him the greatest person (he’s) ever met,” Pincince said.

Pincince formally welcomed Sellers to the stand with applause, handing him a blue Blue Devils jersey with the number 11 on it.

Sellers, who was in the running for the job five years ago, said it stung the first time around getting passed over, mentioning he turned down a Houston Rockets front office position due to the potential head coaching job, but is happy to get the opportunity this time around.

His first comments as head coach likened the situation to Lebron James’ return to the Cleveland Cavaliers after leaving the Miami Heat.

“I’m extremely happy to be home. I feel like Lebron going back to Cleveland,” said Sellers. “… It does feel good to be back. Something in my heart always told me I might have a chance to come back.”

Thank you’s were issued from Sellers, ranking from current and past administrative staff and coaches at CCSU, to former teammates at CCSU and overseas, to family and previous coaching partners, all of which extend across the country.

A 1991 graduate and former assistant for the Blue Devils when they made the NCAA Tournament in 2000 and 2002, Sellers understands the necessity to win and restore the success of the program.

CCSU has not finished over .500 in a decade and currently holds four players on the roster. Sellers is aware of the areas the team needs to improve, first pointing out the defense and the need to improve on rebounding.

“We need to be a better defensive team, and we need to rebound,” said Sellers. “We were putrid rebounding the ball the last few years and not defending, so I think that’s going to be the core of what we’re going to do,” said Sellers.

Sellers feels the four players on the roster will have no issue buying into his style of play, which will be fast-paced and defensive-minded, saying the players want to work and want to be good at any cost as long as a coach is leading them.

“I want people to say, man that’s one thing about coach Sellers teams, they can defend and rebound and are probably the fastest team in getting the ball end-to-end,” said Sellers.

When it comes to a recruiting approach, Sellers will not shy away from doing what it takes to get the guy he needs, citing his wide base of connections as being something that will help him on top of an already good base of players to recruit from locally.

“Initially I was in the north east because there’s so many good players right here you don’t have to go anywhere,” said Sellers. “The thing is, I’ve been all over the world, so people call me from all over the place. If I want to stay primarily here, or if there’s a kid from Texas or Omaha or Chicago that I could get, then I’ll probably do that too.”

Sellers recalled times when he was with the program where Dickenman would successfully recruit locally, citing those connections as factors that will help make in-state recruiting successful.

“When I was here with (Dickenman), he would invite the high school coaches to a (CCSU) practice all the time. … He got so many different connections with those guys. I feel confident we can get those Connecticut kids here, keep them here. … I’ve heard from a ton of coaches already. … We’ll definitely recruit in-state.”

With the limited success of the program known, and the last major success of Blue Devils men’s basketball coming around the time most high school seniors were born, Sellers doesn’t think it will slow the process of brining in talent that can turn the program around and restore a winning culture at CCSU.

“The history and past, we’ve won here, … I think they’re going to really like what I bring to the table. … I think that’s going to keep their interest and support,” said Sellers.

Sellers will take over a Blue Devils team that finished 5-16 (5-13 in Northeast Conference play) last season.