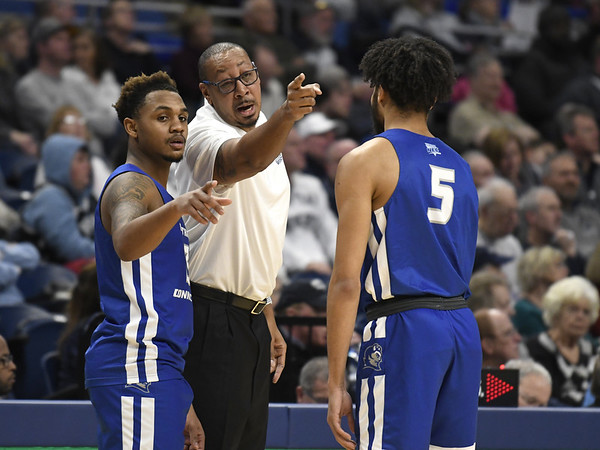 NEW BRITAIN - In a time when people are being asked to stay separated, coming together will be one of the keys to improvement for the CCSU men’s basketball team as it enters its fifth season under head coach Donyell Marshall.

After finishing last (11th) in the Northeast Conference a year ago with a 4-27 record overall, the Blue Devils return seven players who started more than 10 games and eight players who averaged at least 17 minutes per game, and are looking to their enhanced comfortability playing with each other to give them an advantage in what will be a strange 2020-21 season.

“We’re hoping that only winning four games last year, we can improve on that pretty significantly,” said Marshall, whose team begins its season Wednesday against UConn, the school the Blue Devils head coach starred at. Tipoff is 8 p.m. “The mindset of the players that have come back [is good]. One thing we’re happy about, especially only winning four games and having such a young team, we thought we were going to have a lot of transfers, but the kids really thought they had something special. They came ready to play, they worked their tails off.”

That could work out well for CCSU, which was voted to finish ninth in the conference this year.

Marshall’s squads have won fewer than 10 games in two of his previous four seasons in New Britain with just one appearance in the NEC tournament. He led the team to six wins his first year with the program in 2016 before reaching the conference playoffs the following year with a 14-18 campaign.

Due to covid-19 and the new changes to the schedule the conference put in place, the Blue Devils will have an 18-game slate of NEC contests this season along with some additional out of conference matchups and will look to outdo that and improve on its 3-15 conference record from last season.

“Practice has been pretty good, especially with only having 10 players for the last couple weeks and not really having a substitute in practice,” Marshall said. “I thought the players have been doing a good job. I actually think, other than obviously trying to make the team better, I think the thing to worry about most is staying healthy and the guys have done a great job of taking care of that.”

How CCSU does this season will most likely come down to its guard play.

After being outscored by an average 14.1 points per game and averaging just 10 as a team last year, Marshall expects that aspect of his team to show improvements from previous seasons and make a difference for them offensively.

“Our point guard position is definitely an upgrade from what we’ve had the last couple of years,” Marshall said. “I think just the kids being coachable and wanting to learn and I think the biggest thing is these kids playing together. I think they really like each other, they really want to do well for each other and they have each other’s backs.”

Ian Krishnan returns for his junior season with the Blue Devils after leading the team in scoring with 12.5 points per game in 19 appearances. His 45.2 percent clip from behind the 3-point line was the best on the team and by far the best of anyone who averaged more than one attempt. Aware of how he already contributes positively, Krishnan is working to improve the weaker facets of his game to help his team in as many ways as he can.

“I think for me, taking it to the next level personally is just working on the other parts of my game,” Krishnan said. “I’m very strong shooting-wise and defense-wise, but the decision making, ball handling and kind of controlling my game, that’s what I’ve been working on is trying to slow my game down a little.”

While there is plenty of familiarity playing together, the Blue Devils still lack experience overall with only one senior on the roster. Marshall said his players show their enhanced maturity in practice and he is hoping to see that decision making and understanding more once games begin.

“There’s going to be times in games, even though there’s no fans, people have the crowd noise and things like that where they’re not going to be able to hear us,” Marshall said. “The point guard and other players are going to need to be able to take control on the court and be coaches on the court. I think guys have been doing a really good job of correcting each other, they’ve been able to see the mistakes. There have been times in practices where we might stop because of a mistake and they already know what the mistake is and I think that was part of the growth process.”

CCSU’s conference schedule does not begin until Dec. 8 when it travels to Hackensack, New Jersey for games with Fairleigh Dickinson on consecutive days, but the Blue Devils will start their season with a much more challenging road contest against UConn on Wednesday.

They were also slated to participate in the bubble at Mohegan Sun for a game against Maine on Friday, but that was canceled due to a positive coronavirus test in the Blackbears’ program. Marshall said the tournament is looking for a replacement team.

That means CCSU will be looking to see improvements on both offense and defense as Krishnan was the only player to average more than 10 points and no one was able to average five rebounds. Sophomores Greg Outlaw, Myles Baker and Jamir Reed each notched more than eight points per game and will be looked to for increased offensive production this year. Krishnan, meanwhile, primarily liked to get his points from the outside, but made a greater effort to score at the rim as the season went on. An 80-percent free throw shooter, he is looking to diversify his scoring opportunities this year.

“I’m definitely trying to get back to [scoring inside],” Krishnan said. “It’s more about learning the right moves to make at the right time and taking better shots and that will all lead to me getting back to the rim. Free throws definitely help, especially for a shooter, they help you find your touch, calm down during the game, help you team get back into it. Free throws are very important so it’s definitely part of the game I’m trying to improve on.”

While having this basketball season is important to everyone involved, the impacts of the pandemic on the season and everyday life continue to take their toll and Marshall and his coaching staff are doing their best to be aware of that.

“You definitely see it messing with them mentally,” Marshall said. “It’s been difficult at times, they’re kids, they’re young, they’d like to go to the mall and hangout, they would like to go to Chipotle. They’ve actually been staying in their dorms, even the cafeteria. They can’t go to the cafeteria and really hangout and meet up with friends. Everything in the cafeteria is to-go. It’s really been mentally draining on the kids at times and I think as much as we want a basketball season and want sports, we also have to think about their mental health during times like this.”