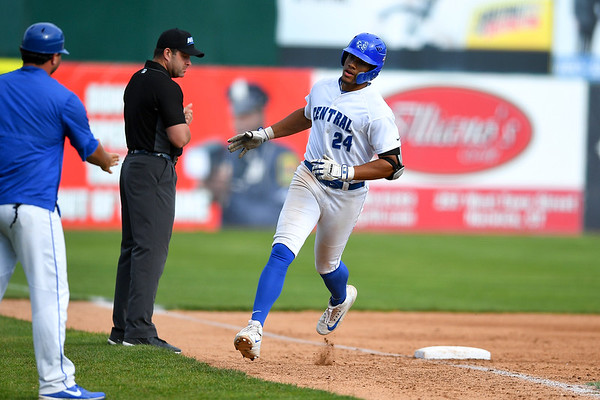 “This is a great opportunity and obviously I'm really excited," Bowens said. “It’s unfortunate that this season got cut short, but I had great memories at CCSU. I look forward to this opportunity and what the future holds.”

Bowens, a redshirt junior and one of the top sluggers in the Northeast Conference, went undrafted during the 2020 MLB Draft, which was shortened to five rounds from the normal 40 due to the COVID-19 pandemic. Qualified draft-eligible players had the option to either to sign with MLB teams or return to college. Bowens, who plays first base, opted for the professional ranks.

He now becomes the 10th Blue Devil over the past six seasons to sign with a professional organization. Bowens is also the fifth member of the 2017 NEC championship squad to go on to join the professional ranks.

“This is well-deserved accomplishment for TT and a testament to his hard work,” CCSU head coach Charlie Hickey said. “TT never lost sight of his goals and worked to get this chance. He set an example for everyone in our program with his work ethic and we will look forward to following his career and what he achieves. It also shows that if you put in the time and effort to take advantage of the opportunities you receive, people will notice.”

During his time with the Blue Devils, Bowens posted a career .306 batting average and hit 13 homeruns with 72 runs batted in across 96 career games. He added 66 runs scored and collected a total of 41 extra-base hits, while helping to lead CCSU to a pair of NEC championships in 2017 and 2019.

Bowens powered the Blue Devils to the 2017 NEC Championship and an NCAA bid as a freshman when he hit .636 with a 1.363 slugging percentage and was named Most Valuable Player.

Bowens returned from an injury to play the final 32 games of the 2019 season and batted .376 with a .640 slugging percentage. He hit five homers and drove in 26 runs, while earning All-NEC Second Team honors. Bowens was also named to the NEC All-Tournament Team after leading the Blue Devils to another NEC title.

He continued to showcase his hitting ability in the NCAA Tournament, hitting a three-run homer and drove in five runs at fifth-ranked Arkansas in the regional opener. He also helped CCSU capture its first NCAA Tournament win with a victory over No. 24 California the next day.

Bowens further boosted his profile thanks to a strong summer with the Mystic Schooners of the New England Collegiate Baseball League in 2019. He was named the Top Pro Prospect and Rick Ligi MVP, earned NECBL First Team honors and was selection to the league’s All-Star Game. Bowens set the NECBL record with 53 RBIs during the season and hit a league-high 16 home runs to go along with a .331 average in 39 games played. At the home run derby on all-star night, Bowens launched 40 home runs, including 24 in the championship round.