CCSU softball upset, but understanding about losing out on 2020 season after spring sports cancellations 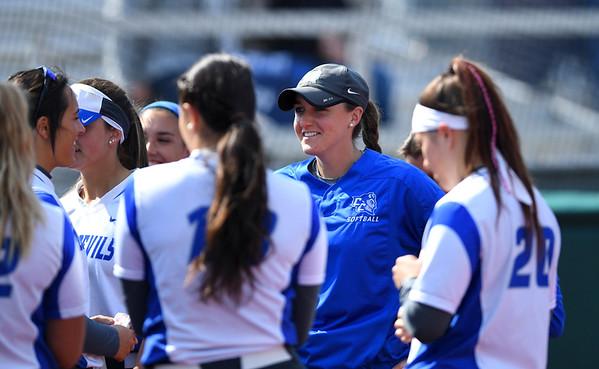 NEW BRITAIN - Breanne Gleason is thankful Central Connecticut State made sure to put the health of its student-athletes before winning or losing games.

But for the Central Connecticut State softball team, the Northeast Conference’s decision to cancel the spring season on Friday amid coronavirus concerns was still a tough one to process.

“They were heartbroken and I think they still are,” the CCSU softball head coach said of her players. “Big picture, they get it. They understand this is the right thing, but they put in so much hard work. They’re heartbroken they don’t get to play as the 2020 team. We’ve been working since August as a group and excited to show it on the field. It’s hard to swallow. Even though we know it’s the right thing, it’s hard to get ripped apart so fast and not even get to say goodbye. When we left campus, we thought we’d have the ability to still compete this year and then a couple of hours later that was also taken away so it’s been really tough for them.”

The NEC’s decision came a day after the NCAA already canceled its winter and spring championships, including the Division I men’s and women’s basketball tournaments, the College World Series and the College Softball World Series. The conference had originally suspended conference play until at least March 29, while CCSU took the extra precaution of suspending all of its athletic activities until at least April 7.

CCSU announced on Tuesday the softball team’s three-game road trip in Florida scheduled later this month was canceled and that Wednesday’s softball doubleheader against Manhattan was set to be played in an empty park, but the game wound up being canceled before first pitch. The Blue Devils had played just four games this season before Gleason had to inform her players of the cancellations.

“It’s just been over text so far and we have a team group chat,” said Gleason, whose team was picked to finish fourth in the NEC’s preseason poll. “I sent them the official news and then I had a separate conversation with our seniors because this affects them the most. They’re still in shock and really sad. But like I said, they understand why. It’s more that we miss each other and they’re missing the opportunity to play the game they love. They didn’t know the last time they played that it might be the last time in their lives. It’s a lot to take on all at once.”

What will happen to CCSU’s seniors will be one of the biggest questions for the program heading into the fall. The Blue Devils currently have five seniors - Emily Cronin, Southington’s Kaitlin Paterson, Sarah Ogilvie, Alicia Bertolino and Guiliana Hathaway - who will have to decide if they want to return to the program or not. The NCAA announced Friday its council leadership “agreed that eligibility relief is appropriate for all Division I student-athletes who participated in spring sports.”

There are a few issues to sort out in terms of scholarship allocation and how the roster sizes will be affected, especially when it comes to the incoming freshmen as well.

“This has never happened before so I haven’t had the chance to ponder what would happen in a situation like this,” Gleason said. “But I would love the chance to coach these kids again, these seniors, one of which has been with us for five years already. But that’s up to them. If they decide to come back and they get an opportunity to play with our incoming 2020 class that would be great.”

There’s also the matter of how to approach next season after having an extended amount of time off.