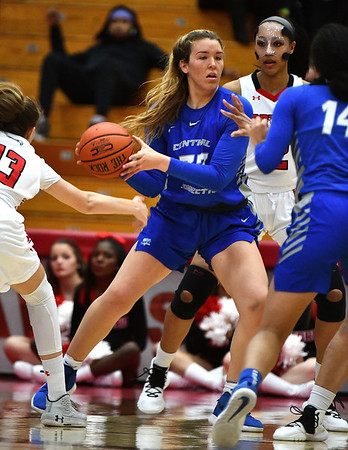 CCSU's Ashley Berube (33) during a women's basketball game with The University of Hartford in West Hartford. Mike Orazzi | Staff Buy this photo
Published on Saturday, 25 January 2020 19:06
Written by

NEW BRITAIN â€“ It wasnâ€™t easy, but the CCSU womenâ€™s basketball team grinded out its first conference win of the season on Saturday afternoon.

Leading Wagner by nine at the half, the Blue Devils hung on for a 66-63 win to move to 1-7 in NEC play and snap a seven-game losing streak. Ashley Forker led CCSU with 23 points, while Ashley Berube and Emma McCamus each added a dozen in the dramatic victory.

The Blue Devils started off slow, shooting just 3-for-13 from the field in the first quarter, allowing the Seahawks to take a 17-12 lead. But CCSU awakened in the second, erupting for 23 points, including the first six of the quarter, capped off by a jumper from Berube to give the Blue Devils the lead.

After a quick 7-0 response from Wagner, CCSU took off for a 13-0 run, with the final seven points all coming from Forker to give the Blue Devils a 35-26 halftime lead.

CCSU increased its lead to 13 at the start of the third quarter before the Seahawks began to claw their way back, cutting the lead to seven before scoring five straight to begin the fourth, trimming the Blue Devilsâ€™ lead to just two. Wagner eventually took a 63-62 lead with 22.3 seconds left in the game, but Berube gave the advantage back to CCSU with a pair of free throws eight seconds later, then after a stop on the defensive end, Forker sealed it with to more free throws with six seconds left to finally get the Blue Devils in the conference win column.

Berubeâ€™s 12 points marked the 10th straight game she has reached double figures in scoring, and led an efficient free throw shooting performance from the team as a whole. CCSU sank 18 of 19 from the charity stripe, including the crucial four foul shots at the end to halt the Seahawksâ€™ comeback bid.