Winchester's, McCarthy's adoration for each other key part to CCSU football's success this season 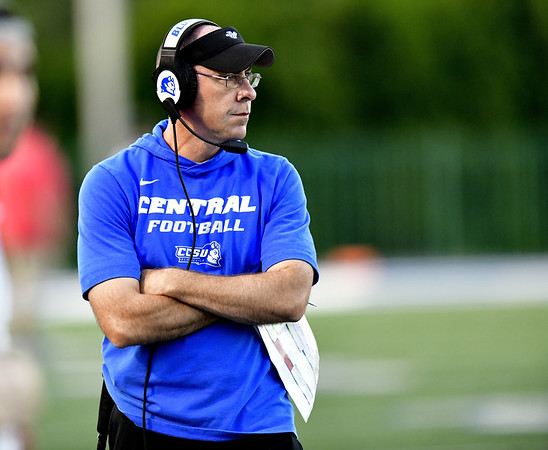 He’s told it before. But it never seems to get old. It’s about the time the quarterback first arrived on campus on May 23rd, the day after Memorial Day, knocked on the Central Connecticut State head coach’s office at 6:15 in the morning and never left.

It was then McCarthy said, “I had an idea of what type of kid I was dealing with.”

Fast forward six month later, and Winchester and McCarthy are sitting at a podium inside the media room at the University of Albany, the place the Blue Devils head coach spent 13 seasons as an assistant. CCSU had just suffered a tough 42-14 loss to the Great Danes in the first round of the FCS playoffs on Saturday, but even as they talk about how their season ended, the mutual respect and adoration for one another isn’t hard to miss.

Both know it would be tough to be where either is at without the other.

“This was my last game, my last season and I’m pretty satisfied with it,” said Winchester, who completed 15-of-36 passes for 148 passing yards, one touchdown and an interception, while carrying the ball 12 times for 69 yards and another score. “I just thank God for coach McCarthy the man, forget the coach and stuff. All [people] see is 11-1 and Coach of the Year. I see the day in and day out, a man who called me during recruiting when he was at home with his three kids. A man who constantly checks on me personally, one who cares.

“When it comes to this football stuff, it’s easy to run through a wall for this man. I appreciate the opportunity that he’s given me and I’m thankful for a man that is a lifelong friend.”

The pair has gone through a lot in a short amount of time. They entered the season as relative unknowns. The quarterback, a fifth-year transfer from Georgia State, who had to replace a multi-year starter, school record holder and NFL-caliber player in Jacob Dolegala. The coach, just an interim one at the time, had taken over the team following Pete Rossomando’s departure to Rutgers.

Together the two helped lead CCSU its best season as a program.

The Blue Devils set a team record for wins with 11. They reached their highest national ranking at 17. There was also the school’s second Northeast Conference title in three seasons as CCSU went through the conference unbeaten, just the third time it’s happened since the NEC champion began securing an automatic playoff spot (Duquesne accomplished the feat 2015 and the Blue Devils did as well in 2017). And of course, the program’s second-ever playoff berth.

Winchester went from a backup quarterback to the NEC’s Offensive Player of the Year and Walter Payton Award Finalist (given annually to the top offensive player in the FCS) after completing 64.7 percent of his passes for 2,549 yards and 19 touchdowns to just five interceptions, while rushing for a team-high 843 yards and nine scores.

McCarthy, meanwhile, became the NEC’s Coach of the Year and had the interim tag removed in October.

And to think it all started with a simple question.

“I found out about Aaron from a guy I coached against,” McCarthy said. “He was captain as a backup and the first question I asked was, ‘why type of kid are we dealing with here?’ And he said, ‘you won’t find a better kid.’ That was all I needed to hear. I wanted to make sure if we brought in a kid for a year, he was going to be the right type of kid with the right type of work ethic.”

As it turned out, Winchester was.

“Without him,” McCarthy said, “we wouldn’t be in the position we’re in.”

And neither would the quarterback without some belief from his head coach, the man he considers to be a lifelong friend.

“Coach McCarthy, when I transferred, was the only one to truly give me a shot,” Winchester said. “This season has been, for me personally, the best I’ve been a part of in my football career. I’m extremely privileged and grateful to have been a part of this program.”