CCSU football not overlooking Merrimack, a former Division-II team, as it gets set for home opener 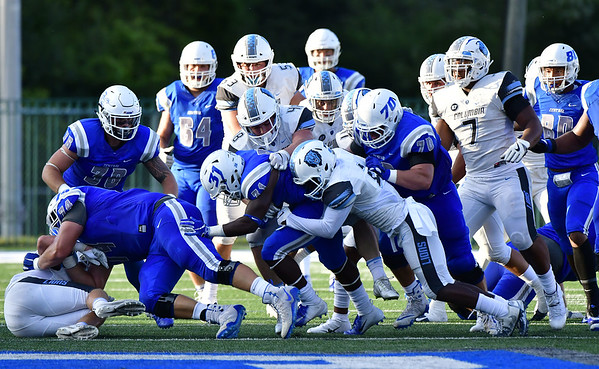 NEW BRITAIN - Merrimack might be in the process of transitioning to the Division I level, but Central Connecticut State head football coach Ryan McCarthy knows it’s never a good idea to take an opponent for granted.

After all, he’s seen it firsthand.

“I’ve been in this position before when I was at Albany and we were making the jump up to the [Colonial Athletic Conference],” McCarthy said ahead of Saturday’s 6 p.m. home opener. “There’s a tendency by other teams to take a game like this lightly, but [Albany] got into the CAA by playing well and Merrimack is in the NEC for playing well. All it takes is to overlook a team and you’re in trouble. We can’t do that on Saturday.”

The Warriors (1-0), members of the Division-II Northeast-10 Conference since 1984, became the 11th member of the Northeast Conference last September and will be full members of CCSU’s conference in 2023-24 upon completion of their four-year NCAA Division I reclassification period. The program will still compete in a full NEC schedule this year, but will not be eligible to compete for NEC’s automatic playoff berth. Last season, Merrimack went 5-5.

But even with the transition between divisions, McCarthy believes the Warriors have an ample number of playmakers to test the Blue Devils (1-0). Their Week 1 matchup against University of Virginia Lynchburg - a 45-14 win - proved as much.

“They have a dangerous quarterback, kid can run and throw,” McCarthy said. “He’s going to challenge us with RPOs, short passes, things like that and also challenge us the length of the field. They have a number of skill guys. On the defensive side, they’re going to go and get the football. They have some athleticism in the secondary. At the first level, they’re stout if anything and hold up well at the point of attack.”

Christian Carter is Merrimack’s signal caller and much like CCSU’s new quarterback, Aaron Winchester, has the ability to impact a game multiple ways. Against Lynchburg, the sophomore completed 18-of-25 passes for 163 yards and a touchdown, while also rushing for 57 more yards on eight carries.

“[Carter’s] problematic,” McCarthy said. “He’s only a sophomore and is only going to get better and better. But we have to make him throw between levels two and three, between the linebackers and the secondary. Our defensive line has to get after him. Johnny Rosario is a player who we recruited. He didn’t make the grades for Division I qualification, but he’s a really good player. They have guys who can stretch the length of the field.”

That means the Blue Devils’ defense is going to have to be prepared for a more diverse ground game than what the unit saw against Fordham in Week 1. The majority of yards the Rams rushed for came from their two tailbacks, including 109 from Zach Davis. In all, Fordham ran for 190 yards in total.

But overall, McCarthy liked how the defense played, especially the struggled it had during the offseason and in training camp in making offenses make mistakes.

“No. 1 they took the ball away,” the head coach said. “In the scrimmages, they pretty much controlled it, but they hadn’t taken the ball away, which scared me a little bit. The guys on the defensive line controlled the line of scrimmage. I like the way we were disciplined for the most part. Fordham did a lot of things that tested tour eye discipline and that should help this week.”

Offensively, CCSU is expecting to face an aggressive Merrimack defense and a lot of man-to-man coverage. The Blue Devils are also expecting the Warriors to place a spy on Winchester, who led the team in rushing last week with 108 yards, while completing 11-of-20 passes for 113 yards and a touchdown.

That’s just fine with CCSU, especially with the number of players the team can get involved in the offense. Last week, eight different players had a least one rushing attempt or catch and McCarthy is expecting Winchester to distribute the ball evenly again. But so far, so good for the graduate transfer quarterback.

“I thought No. 1 he was composed,” McCarthy said of Winchester. “He’s a phenomenal leader and if a player isn’t doing what he’s supposed to be doing, he’s going to let you know in a way that makes guys respond. I think we have to play better upfront on offense. Fordham did a good job of neutralizing the run inside. They blitzed a lot in the A-gap. We need more out of that part of our offense.”

After all, never take an opponent for granted.