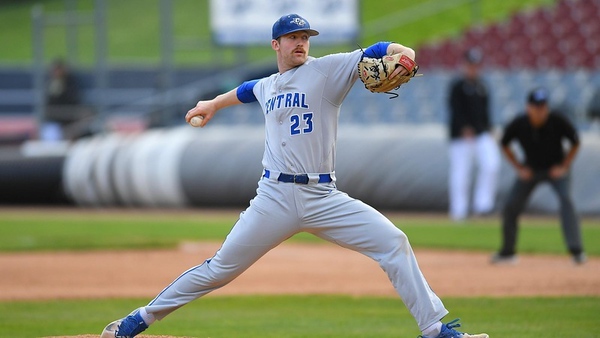 Behind offense from Dave Matthews and pitching from Tom Curtin, the CCSU baseball team made school history on Saturday, winning the program’s first NCAA Tournament game with a 7-4 victory over Cal at the NCAA Regional in Fayetteville, Ark.

Matthews finished 3-for-4 with four RBI and two runs scored, and his three-run home run in the sixth provided all the offense Curtin would need, as he allowed just two earned runs on four hits with two strikeouts and two walks.

“Obviously, it was a special day for our program, [getting our] first NCAA win and in a very well-played, hard-nosed baseball game,” CCSU head coach Charlie Hickey said. “We got some outstanding pitching today from Tom Curtin. Dave Matthews came up huge, we got a lead, and we were able to dodge enough bullets to get that last out.”

After the Blue Devils (31-22) fell down 2-0 in the top of the second, they responded with three straight hits to score a pair of runs. Matthews led off with a one-hop double to the center field fence, Buddy Dewaine hit an infield single, and Matthews scored on a throwing error to first. Jake Siracusa followed with an RBI single to tie at 2-2.

Facing a 3-2 deficit in the third, the Blue Devils Chandler Debrosse opened the bottom half with a double to right, and Matthews lined a two-out, game-tying single to right.

In the fifth, Matthews once again came up big. After Debrosse and Sam Loda reached on back-to-back singles, Matthews dug in and towered a 2-2 pitch into the Baum-Walker Stadium bullpen in right for a three-run home run for a 6-3 lead.

After CCSU added an insurance run in the eighth, the Bears (32-20) plated a run with two outs in the ninth, but Jared Gallagher induced a game-ending pop out for a two-inning save.

Dewaine went 2-for-4 with an RBI and two runs, and Debrossed tallied two hits and two runs.

“This is what you play for,” Matthews said. “You come out here with one goal - to win the conference championship - and after that, we got the privilege for all of us to be out here and for the younger guys to experience this. I have never been a part of something as big as this.”