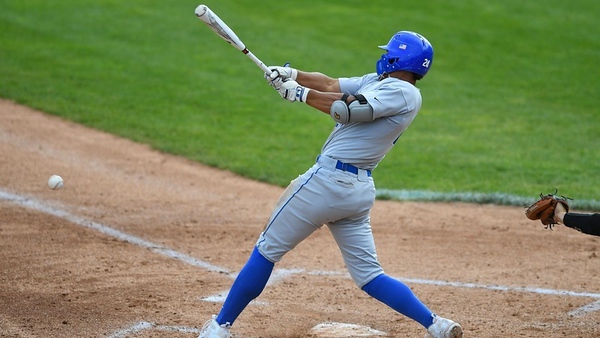 CCSU's TT Bowens during the Blue Devils loss to Arkansas on Friday. Steve McLaughlin | CCSU Buy this photo
Published on Friday, 31 May 2019 20:57
Written by RYAN CHICHESTER and PAUL ANGILLY

FAYETTEVILLE - The CCSU baseball team battled through five tough innings against No. 5 Arkansas in the Blue Devils’ NCAA Regional opener on Friday, but eventually, the Razorbacks bats proved too much to tame.

Arkansas scored three runs each in the fifth and sixth innings to break open a tight game and cruise to an 11-5 win in front of its home crowd, pushing CCSU to the brink of elimination.

The Blue Devils will play the loser of Friday night’s late game between TCU and California in an elimination game on Saturday at 1 p.m.

“It was a tremendous experience,” CCSU head coach Charlie Hickey said. “It’s a great atmosphere. They had over 10,000 people at the game. We played hard and we played well. We didn’t play perfect, but that’s OK. They have their heads held high.”

The Blue Devils (30-22) didn’t start the game like a shy underdog, although Arkansas starter Connor Noland was perfect through three innings.

Central got going in the fourth inning, as junior Chandler Debrosse and sophomore Sam Loda led off with back-to-back singles to put runners on the corners. Sophomore T.T. Bowens then hit a fly ball to deep center field to drive in Debrosse and make it 2-1.

But then the Razorbacks rattled off four unanswered runs, including three in the bottom of the fifth. CCSU almost escaped that inning unscathed before Arkansas’ Matt Goodheart ripped a double that landed just out of the reach of center fielder Chris Kanios, allowing the inning to continue.

Blue Devils starter Brandon Fox surrendered a single to Dominic Fletcher after the Goodheart double to put an end to his day.

“I thought they were really aggressive and overall as a lineup they came ready to play today. They hit some good pitches,” Fox said.

“They put pressure on us consistently, but our kids battled,” Hickey said. “Fox got us to the fifth inning of a competitive game. Unfortunately, we gave them another opportunity.”

A trio of defensive miscues in the sixth inning allowed the Blue Devils to score a run. Sophomore Matt Bertochi and Debrosse both reached to begin the inning following Razorbacks errors. After a groundout pushed them to second and third, Bowens hit a grounder to short that was dropped, which allowed Debrosse to score to make it 6-2.

CCSU was able to hang three runs in the top of the eighth thanks to a three-run homer by Bowens, who finished the day with five RBI.

“I knew their intentions were to get a double play. He just missed his spot and the goal was to take advantage of mistakes and he gave me one and got into it,” Bowens said.

“T.T. delivered a big three-run home run for us,” Hickey said. “We had a couple more chances, but just couldn’t get that big hit early in the game.”

The Razorbacks answered with two more in the bottom of the eighth to put the game out of reach and put CCSU in do-or-die mode come Saturday.

“They earned the opportunity to come down here and play,” Hickey said. “We’re just going to look at it as the mythical ‘one game at a time.’ We’re looking forward to playing against another one of the top teams in the country. We’ll see what comes of it.”

Win or lose, the Blue Devils are enjoying their opportunity.

“It’s an amazing experience,” Bowens said. “Being a smaller Northeast school and being able to earn the privilege to come down here to compete against with these teams is definitely a very good experience to play in this atmosphere. The fans were screaming and yelling the entire game, you can’t recreate that experience.”