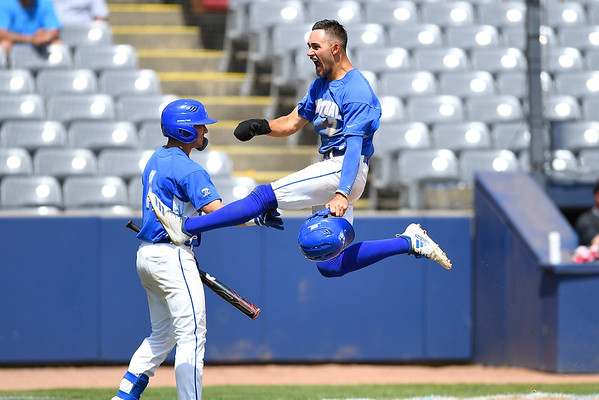 CCSU OF Chris Kanios, right, jumps in the air in celebration after scoring the deciding run in Sunday’s NEC championship game. The Blue Devils will now play Arkansas on Friday | Steve McLaughlin | CCSU Buy this photo
Published on Monday, 27 May 2019 21:47
Written by DAVID GLOVACH

It was a familiar sight and a familiar feeling for the Blue Devils, who for the second time in three seasons learned where they were heading to play in the NCAA Tournament.

The other two teams in the region are TCU (32-26) and Cal-Berkley (32-18). The regionals are a double-elimination format. All games are on ESPN3.

If the Blue Devils pull off the upset, they will play Saturday at 1 p.m. Should CCSU lose, its next game will be at 7 p.m. instead. Games on Sunday and Monday, if necessary, will follow.

The Blue Devils (30-21) won the NEC’s automatic berth with a dramatic 3-2 win over Bryant on Sunday after coming out of the loser’s bracket to win the conference crown.

This will be the sixth tournament appearance for CCSU, which also won conference titles under head coach Charlie Hickey in 2002, ’03, ’04, ’10 and ’17. CCSU went to Fort Worth, Texas for the 2017 regionals where they took on the Horned Frogs. In 2010, the Blue Devils played in their home state in Norwich and had previous trips to the University of Texas (2002), Arizona State (2003) and Oklahoma City (2004).

The schedule for the weekend is as follows (all times Eastern):