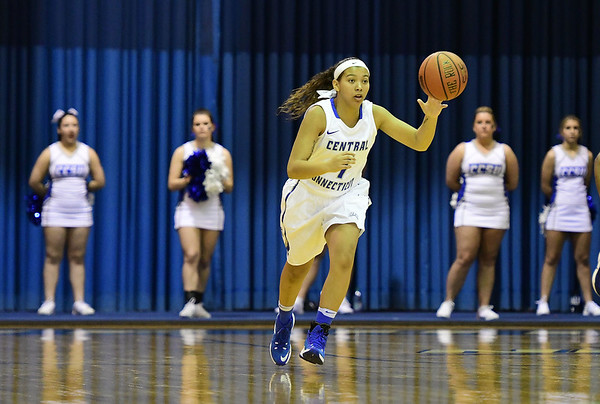 BROOKLYN - Heading back on the road for Saturdayâ€™s matchup against LIU Brooklyn, the CCSU womenâ€™s basketball team wanted to erase its bad memories of an 0-4 road trip that sparked its current stretch of six straight losses.

More importantly, the Blue Devils needed a win to snap a three-way tie for eighth place in the NEC and separate themselves as the last team to qualify for the conference tournament. With the Blackbirds being one of the teams knotted with CCSU in the standings, Saturday was the perfect time for the Blue Devils to get back in the win column and put themselves in a position to live past their final regular season games next week.

Thanks to a fast start and another big offensive performance from senior Kiana Patterson, CCSU got its crucial win with a 72-59 victory, improving to 4-12 in conference play.

Patterson finished with 23 points, scoring at least 20 points for the eighth time this season. Sophomore Ashley Berube added 13 and just missed a double-double by grabbing nine rebounds, while scoring in transition in the gameâ€™s early minutes to help the Blue Devils jump out to a 10-2 lead.

CCSUâ€™s defense forced four LIU turnovers in the first quarter, while building a 21-13 lead thanks to 3-pointers from Patterson and fellow senior Sydney Hines. When the Blackbirds settled down offensively and used a 13-4 run to take a 26-25 lead in the second quarter, Hines was there again to knock down a three on the following possession and reclaim momentum for the Blue Devils, as the CCSU defense would allow just three points for the rest of the half.

While the defense dug back in, the offense ran out to an 11-point halftime lead thanks to a baseline jumper from junior Ashley Chin just before the buzzer.

The Blue Devilsâ€™ stingy defense continued in the second half, allowing just four points through the first four minutes of the third quarter as CCSU pushed its lead to 15. At the start of the fourth, Central knocked down four of its first five shots to maintain a comfortable advantage. LIU briefly cut the lead to single digits with less than three minutes to play, but never seriously threatened to complete the comeback.

The Blue Devilsâ€™ much-needed win sets up a thrilling finish to determine their conference tournament fate, as they host Fairleigh Dickinson on Monday before closing the regular season at home against St. Francis Brooklyn on Thursday. FDU was one of the teams tied with CCSU heading into Saturdayâ€™s action, while St. Francis currently sits in fourth place in the NEC.