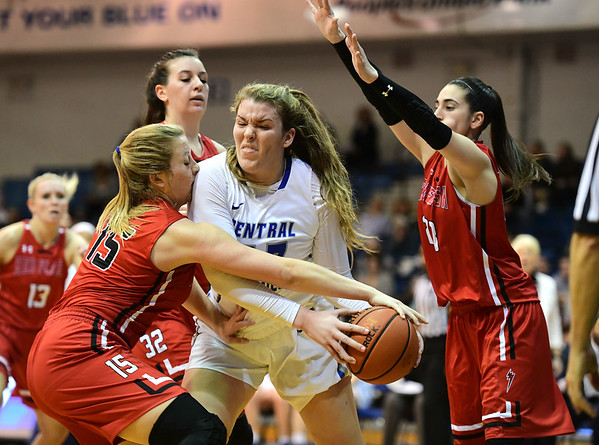 NEW BRITAIN â€“ A return home for the CCSU womenâ€™s basketball team didnâ€™t seem to solve any of its recent issues.

After dropping all four contests during their road trip, the Blue Devils fell 73-46 to Sacred Heart on Saturday afternoon. Aside from an early 5-3 lead, CCSU played from behind the entire game, as the Pioneers consistently extended their lead while the Blue Devils shot just 21 percent from the field in a decisive second quarter.

Sophomore Ashley Berube recorded her sixth double-double of the season with 12 points and 11 rebounds, while senior Kiana Patterson added 11 points as the only other Blue Devil to finish in double figures.

Patterson knocked down three triples on the day, accounting for half of her teamâ€™s points from beyond the arc.

Before the offense cooled down in the second, CCSU had cut Sacred Heartâ€™s lead to 15-12 in the first quarter, but the Pioneers ended the opening period with an 11-4 run before opening the second on a 14-3 run. By the final minutes of the first half, Sacred Heart held a commanding 40-19 lead.

Katherine Haines helped the Pioneers pull away with 17 first half points, while the Blue Devils managed just nine points in the second quarter.

CCSUâ€™s offense showed no signs of life in the third, scoring just seven points in the frame to ruin a chance to chip away at Sacred Heartâ€™s lead, as the Pioneers scored just nine in the third quarter, while missing a number of opportunities at the free throw line. By the final buzzer, Sacred Heart had missed 10 of its 27 free throw attempts.

Where the Pioneers lacked efficiency at the charity stripe, they made up for it from the floor. Four different scorers finished in double figures, led by Hainesâ€™ 24. Candice Leatherwood added 13 to help her team finish above 70 points, marking the third game in a row that the CCSU defense has allowed at least 70 points.

The Blue Devils finish the season at home in three of their final four games, starting Monday against Mount St. Maryâ€™s.