File photo The 60th Mum Festival will be honoring its history with “Mum Memories.” Buy this photo 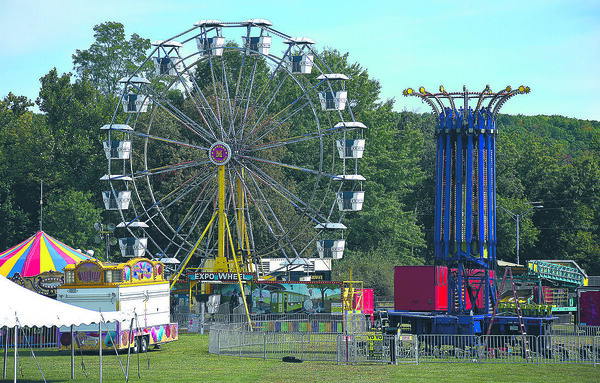 File photo Rides, games, music, and a laser show are set to highlight this year’s Mum Festival. Buy this photo

BRISTOL – With the 60th anniversary of the Mum Festival approaching, the Bristol Historical Society and Mum Festival Committee will be celebrating the community gathering’s sixth decade with an exhibit spanning programs, pictures and more inside the festival marquee tent this weekend.

“In 2015, the former Mum Festival Committee dissolved and said they couldn’t do it anymore. They had dwindled in volunteers and what not,” said Festival Chair Jack Ferraro. “The Bristol Exchange Club had run the parade probably for 50 years. I was parade chair at that point and got a call to the mayor’s office, who was Ken Cockayne at the time, and he said what did we think about still doing the parade.”

Around 20 volunteers help in organizing the event, often starting in that given year’s January.

“It’s about a $130,000 to $140,000 endeavor of money we’ve got to come up with each year,” said Ferraro, noting that area civic organizations, volunteers, businesses and the city’s government heavily contribute to making the annual festival happen. He continued saying organizers worked hard to focus on “bringing quality entertainment and attractions” for Bristol residents and visitors.

The Mum Festival, according to Bristol Historical Society and Mum Memories exhibitor Tom Dickau, said the Mum Festival had started in 1963 as the Bristol Fall Festival before being named after the iconic flowering chrysanthemums. Over the years, the event would attract a variety of TV personalities, area celebrities and more to become part of its activities.

“The Mum Festival was always spread out throughout town. It’s not just the parade and the mum field. They had activities surrounding it,” said Dickau. “That’s a big part of it. The history of the Chrysanthemum Festival is extremely extensive, elaborative and involved in the community.”

“It hallmarks Bristol as a community as we’re known as the Mum City,” he continued.

Assisting with the Mum Memories exhibit, Ronald Tessman has created a video from days worth of historical visual materials to highlight the history of the event, which will be playing at the display.

Bill Schwab, festival chairman in 1972, noted the Greater Bristol Chamber of Commerce  had at the time been heavily involved with the festival and several civic organizations were noted for taking on specific pieces of the event.

“I think it became a signature identity that the town was very proud of,” he said. “The volunteers would be local, commercial owners of stores, doctors and lawyers. It was amazing the cross section of the community that wanted to be involved and contributed.”

The Mum Festival will be held along Memorial Boulevard, starting at 5 p.m., Friday. Brian’s Angels Homeless Outreach is slated to sell some of the iconic plants during the event.