Britni Pastyrnak Bristol Health President and CEO Kurt Barwis speaks as the hospital on Wednesday hosted a private viewing for donors to the facility's new Emergency Room. Buy this photo 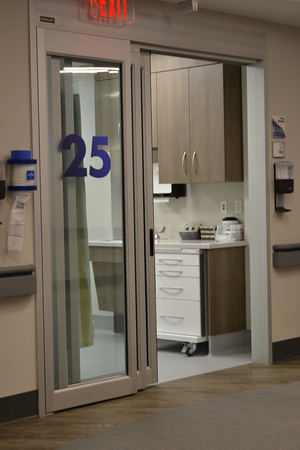 BRISTOL – Bristol Hospital on Thursday is set to open the second half to its newly-renovated Emergency Center.

The second half – which occupies the old ER area –  has been closed for renovations since December, when patients began being seen in a 12,500-square-foot addition that opened. Beginning Thursday, patients will be seen in both spaces, which now mirror each other and fit together seamlessly as one space.

“Every part of this has been designed to the highest standards,” Kurt Barwis, president and CEO of Bristol Health, told donors during a private showing of the new space on Wednesday. “This is a testament to what community can do for you.”

The Bristol Hospital ER now doubles in size, with 28 beds. The new space makes it much easier for hospital staff to monitor patients, as it has a rounded design that resembles an infinity symbol. This will help doctors, nurses and other clinical staff watch for patients who may experience allergic reactions, suffer from sudden respiratory distress or have a seizure or another type of emergency. The all-glass doors make for an open view of patients, with curtains as an option when privacy is needed.

“They didn’t want a traditional grid design,” said Ron Goodin, of Phase Zero Design, adding that older-style ERs have a grid design like the streets of New York City.

The presentation of the new ER will now reflect the great care delivered at the hospital, Goodin said.

“This is fantastic,” said Raymond Gorski, director of facilities at Bristol Hospital. “You get a real wow factor when you walk in the door.”

Barwis said the addition and renovations that now form one ER would not have been possible without the support of the donors who were granted a private viewing on Wednesday.  The ER has been named after the largest donor: Nancy Brault, president of Ultimate Wireforms, Inc.

Barwis said now-retired Mary Lynn Gagnon, through her work with the Bristol Hospital Foundation, was able to help raise $5.6 million toward the ER project, eclipsing the $4.3 million goal.

“Financially, this is a horrible time for hospitals across the country,” Barwis said, adding that even some of the larger health care systems that never seem to lose money have reported numbers that are in the red.

“This is a special recognition for very special people,” Barwis told a number of donors Wednesday, saying the project would not have been possible without their support.

John Lodovico, chairman of the board of the Bristol Hospital Board of Directors, also recognized the amazing work done by doctors, nurses and other staff who worked around the ongoing construction and treated patients.

“You have to remember, we never shut down,” Lodovico said, adding that the addition was built adjacent to the old ER before staff transitioned into the new space, while the old space was renovated.