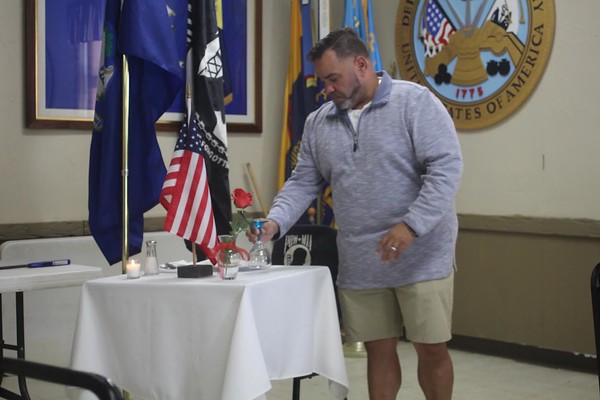 BRISTOL – Members of American Legion Post 2 gathered this past Friday to remember those service members who are prisoners of war or missing in action and to pray for their return.

This year’s ceremony saw local veteran Bob Barnett speak to his experience as the relative of a POW/MIA soldier. Barnett’s brother, George Joseph Barnett Jr., was a prisoner of war during the Korean War. In 1954, Barnett learned that his brother had been executed at a prisoner of war camp.

“We do this because we can’t forget, not any of them, not George, not World War II veterans or WWI” said Barnett. “In my case, I know what happened to my brother. There are many who will never know.”

Many of those executed in Korea were buried in mass graves. Their bones have been recovered, but it is taking time to identify them with forensic testing.

“I’ve spoken with the two men who were on burial detail and buried my brother – they survived the camp,” said Barnett. “We were allowed to go in and recover the bones of 2,500 prisoners,” said Barnett. “The bones were put into boxes, some of which had the remains of as many as 17 people per box. They were brought back to Maryland, where they are being identified.”

Barnett said he is hopeful his brother’s remains can be found using forensic analysis during his lifetime.

“He was my older brother; he taught me how to fish,” said Barnett. “He is still in my heart every day. I’m 90 years old now and my sister is 87. I’m sure that they will find him. If not in my lifetime, then my daughter and nephew will be the ones to bury him. We have a spot picked out.”

The POW/MIA Remembrance Day includes the “Empty Table Ceremony”, which in past years was performed by former mayor and veteran Art Ward, who died this June. Former City Councilor and local veteran Scott Rosado stepped up to perform this year’s ceremony.

The following is the script for the ceremony:

“This table is set for one person - they are missing from our ranks and unable to be with their loved ones and family. The table is small, representing the frailty of one prisoner against their suppressors. The tablecloth is white, representing the purity of those who responded to their country’s call. The rose is red, like the blood they shed to ensure our freedom and the sacrifices of their friends and family. The ribbon represents those who demand an accounting for the company not with them. The lemon represents their bitter fate, and the salt represents the tears of their friends and family.

The glass is inverted - they can’t toast with us. The chair is empty; they are not here. The candle is the light of our hopes which we hope will illuminate their way home to the grateful arms of their loved ones. The flag is to recognize that many will never return and made the ultimate sacrifice for our freedoms.”