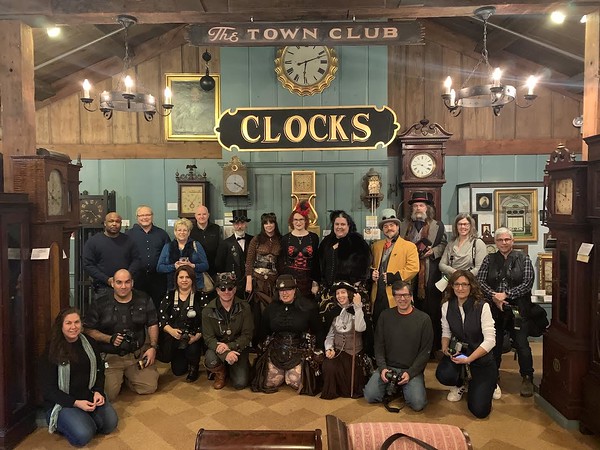 BRISTOL – A group of "steampunk" enthusiasts and local museums will offer a "Victorian Summer Fantasy in the Park" Aug. 27 on the Federal Hill Green, showcasing the culture and history of the "age of steam."

Steampunk is a subgenre of science fiction that incorporates the aesthetics of 19th-century steam powered technology.

The free to attend event, presented by Silk City Steampunk and Oddball Newt Productions, will be held from 10 a.m. to 5 p.m. on the Federal Hill Green. It will offer a Victorian-style picnic, a steampunk crafters' swap shop and a demonstration of  event organizer Scott Lyon's "Wonder of the Age" "Whistco Wonder" steam powered engine in full operation.

Following the "Victorian Summer Fantasy in the Park," there will be an after party held at Firefly Hollow Brewing at 139 Center St. at 5:30 p.m.

Lyon, a Terryville resident and a member of the Silk City Steampunk group, said this event is his personal project. His goal is to bring Steampunk culture back to Bristol, which he sees as the perfect backdrop for these events.

"Since most of our gatherings are photo shoots, we will be strolling the sidewalks of Federal Hill, to meet the neighbors, share our culture, and learn about the history of the neighborhood," Lyons said.

Activities will include a scavenger hunt and also a "Tea Dueling" tournament, administered by Alumni Champions.

"Contestants sit across the table from each other and, at the starting gun, dip a biscuit in their tea and hold them until it one of the biscuits breaks," Lyons said.

Entertainment will include ragtime piano music at the bandstand and iced tea will be offered for refreshment.

Lyons first learned about the steampunk scene while working as a motorcycle mechanic.

"One of my neighbors told me that every time you build a motorcycle, it's a steampunk style," he said. "This culture has made my life. I was a kid who could not hit the ball, so I liked to work with scrap metal and machines. The first steampunk event that I attended was the one at the New England Carousel Museum, held by the Brass Ring Academy, in 2019."

Since then, Lyons said, he has spoken to representatives from Bristol's libraries and museums about creating a new event.

"Bristol is an old industrial town that is really important to the Age of Steam," he said. "I thought that we could have more Steampunk events in this city with its backdrop of beautiful Victorian homes."

Lyons anticipates that he may be able to bring 40 to 50 steampunk enthusiasts to Bristol for the event.

"Our group includes members from Massachusetts, Vermont, Massachusetts and New Hampshire," he said. "This is a great opportunity to show them why Bristol is a great place to come to."

Lyons added he hopes to have members attend the American Clock & Watch Museum's "Mad Hatter Tea Party," which will also be held Aug. 27, to read books for the children who attend that program.

Lyons said the group he works with, Silk City Steampunk, began as a Facebook group set up by Dave Carlson, his wife, Linda, and their friends in and around Manchester.

"They got together with the organizers of the Hartford County Amateur Photographers' Facebook group, and they will choose a garden park, a museum, or a historic site, and a date to meet for a photo shoot," he said. "So, we'll have a great fun afternoon, sometimes with a dinner or a picnic together. And, the following week, the pictures will all be up on Facebook to share and swap."

"Dave's personal goal is to provide an event every month of the year, for the Steampunk community of New England," he said. "When I joined the group, back in 2019, I think they had just clicked over six or seven hundred members on facebook. Today, we are well over 2,000 members. We did three events in July, and have 3 more in August, so there is a lot going on for Steampunks in New England."

Those who attend the "Victorian Summer Fantasy in the Park" are welcome to bring lawn blankets and folding chairs.