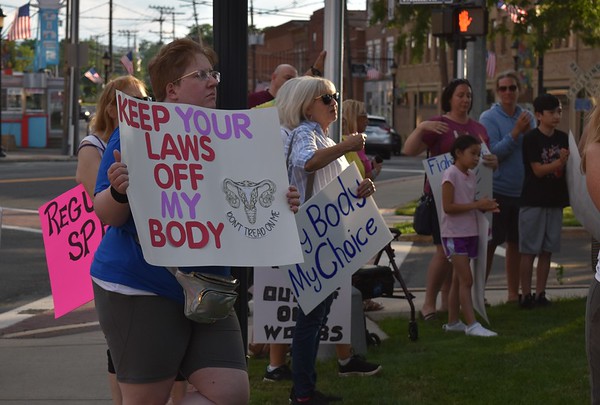 Residents from both in and outside of Central Connecticut held signs in front of the building with slogans promoting women’s choice and bodily autonomy. Drivers passing nearby honked or shouted from their cars at those gathered.

Area Democrats and candidates spoke against Republican opponents and the court decision, saying that a woman should have a right to choose whether to terminate or carry on with a pregnancy. Many cited health reasons for pro-choice views, that a woman shouldn’t be required to carry an unwanted pregnancy due to rape and more.

“I think it’s important that we get our point across because it’s not being listened to by politicians and the Supreme Court,” said protestor Rosemary Simko of Harwinton.

Fellow protestor Tamara Christensen of Torrington said that even though she felt pro-choice policies were protected in Connecticut, they may not be in the future.

“We have to protect our rights even in states where we feel our rights are protected. We have to do this,” she said. “It’s very important and the Supreme Court decision makes a huge disparity between people who have means and people who don’t.”

Among those who spoke at the rally included Laura Minor, a Bristol reproductive health rights activist, who reminded area residents of how Bristol once sat at the front of national eyes in battle over policy on abortion. She led supporters in the fight against the 1985 Bristol Abortion Referendum, a time when Bristol was selected by anti-abortion groups to be a countrywide example for a referendum.

“Of the three American towns which held votes on abortion that year, Bristol became the one to follow on national television, radio and in print,” she said. “In all three towns, the referendum was defeated by pro-choice men and women willing to vote their conscience.”

Minor said residents should remember the long history of the fight for reproductive rights, both locally and nationally.

“We must speak out,” she said. “We must donate and work for candidates who support our rights and to expose the views of anti-abortion elected officials and candidates. In 1985, I didn’t think I’d ever have to speak about this again. I urge all of you to recognize the power of your voices, your efforts, your vote and your donations, however small or large.”

Bristol physician specializing in obstetrics and gynecology Dr. Amy Breakstone said she felt that conversation missing from national debates was that the right to have an abortion was a right no one wished they had to use.

“They’re like lifeboats on a cruise ship,” she said. “You don’t ever want to climb into those lifeboats but everyone is really glad that they’re there. Those boats exist because of very rare occasions circumstances are such that the alternative is too horrific.”

The doctor said she recently explained to a patient that she had never provided women with an abortion without them struggling with the decision, whether that was because a fetus had developed a lethal deformity or other challenges.

“Ending a pregnancy is not a political choice. It’s a very, very personal choice and is never, never easy,” said Breakstone. “It’s not easy even for those who provide the services. Every story is heartbreaking. We do it because it’s the right thing to do and because women’s lives depend on us.”

Interference in the relationship between a patient and a healthcare provider is destructive on every level, she said.

Enfield Town Manager Ellen Zopp-Sassu, and former mayor of Bristol, encouraged area residents to vote for Fortier and spoke of the necessity of always being present to vote.