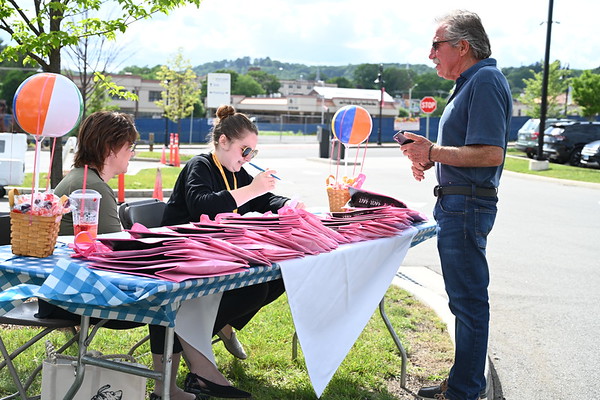 Marchesi, who was diagnosed with breast cancer in August last year, said she felt throughout her journey overcoming the disease like a character from the Wizard of Oz. She compared cancer to a house, saying it just came down on top of her.

“During my journey people in my life took on the personas of characters in the film,” Marchesi said.

Hospital officials liked Marchesi’s analogy of fighting cancer so much that they themed the cancer survivor event on it.

“That’s how I kind of processed it,” Marchesi said of her comparison to the film.

“For all intents and purposes, I’m pretty cancer free,” she said, adding that the doctors and nurses at Bristol Health were “wonderful” throughout her entire battle with breast cancer. “There’s no reason to go outside of Bristol.”

The cancer survivors who attended the annual event Thursday afternoon wrote down their worries or concerns on a piece of rice paper before tossing the paper into water, where it dissolved – something hospital officials said was symbolic of the witch melting in the Wizard of Oz.

“This event is so special because we get to celebrate with our survivors and recognize their strength and resiliency,” said Jeannie Robbins, clinical director of the Bristol Health’s Cancer Care Center and Beekley Center for Breast Health and Wellness. “It’s about sharing stories and helping others move through their journey towards healthy living.”

“It’s nice to celebrate anyone who has beat any type of cancer,” said Mary Lynn Gagnon, who retired from the Bristol Hospital Foundation late last year and is a survivor who has been diagnosed with cancer multiple times.

Sal Cretella is also a survivor who shared his story Thursday afternoon. He said just about this time last year he thought he pulled a muscle when he felt pain in his side. Three doctors misdiagnosed it as a pulled muscle before it was revealed he had multiple myeloma – a form of blood cancer. Cretella underwent injections to the stomach, immunotherapy and five months of chemotherapy, he said.

Throughout it all, he kept a positive attitude and was greatly helped by the Bristol Health doctors and nurses.

“And it’s not just the doctors and nurses,” Cretella said. “It’s everyone.”

“What we survive now, people died of 20 years ago,” he added.