Lamont spoke on the state of manufacturing in Connecticut during forum 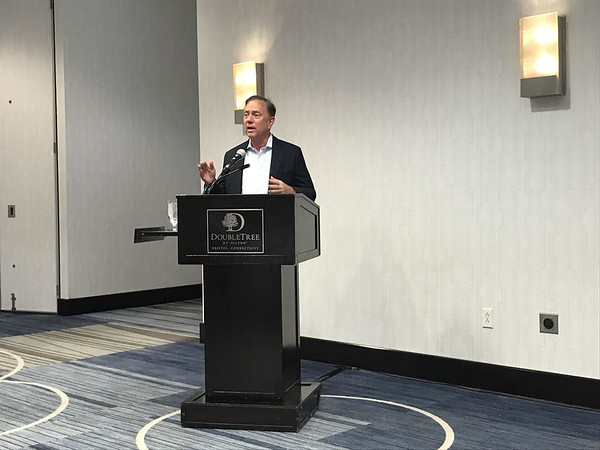 BRISTOL – Gov. Ned Lamont spoke on the state of manufacturing in Connecticut at the Central Connecticut Chambers of Commerce’s “The Businesses of Life Sciences” forum and showcase at DoubleTree by Hilton Tuesday.

The event saw three panelists, Dr. Nicole Wagner, president and CEO of LambdaVision, LuAnn Ballesteros, vice president of external and government affairs with The Jackson Laboratory and William Hazard, president of Novo Precision, LLC speak at the event. They discussed what it is their companies do, their plans for growth and what the state can be doing to support them. The event was moderated by Paul Lavoie, the state’s chief manufacturing officer.

Cindy Bombard, president and CEO of the Central Connecticut Chambers of Commerce, welcomed the guests and spoke about how the American Rescue Plan Task Force that she is a member of is utilizing $2.4 million in federal funding to create a workforce development training center.

P.J. Cimini, founder and principal of Capitol Strategies Group, LLC, then introduced Lamont. He thanked the governor for all he has done to support the “wonderful mosaic” of bioscience and life science businesses in Connecticut.

Bombard also thanked Lamont for everything he has done to “get Connecticut back in the groove of things again.”

“After the last two-and-a-half years of covid, people now have created a new impression of the state of Connecticut,” said Lamont. “We kept our construction and manufacturing going and our beaches, parks and golf courses stayed open unlike a lot of our neighbors. A lot of people have started to come back to Connecticut. We’ve had 35,000 new families moving into the state for the first time in generations. We are making it easier for young people to be here and our school system is one of the greatest.”

Lamont said that, three years ago, the state “couldn’t seem to get its fiscal house in order.”

“We didn’t know what the budget would be from year to year,” he said. “Now, we’ve got a balanced budget and a surplus for the third year in a row.”

Lamont added that additional daycare programs have been created in Connecticut to support working families. In addition, he said, 75% of the state’s budget surplus was used to pay down pensions.

“This has never happened before in the history of our state,” he said. “We paid $5 billion of our pension debt. We still have about $45 billion to go, but we took about 15% off. That saves us $450 million a year.”

Lamont also said that the state has created 16, 30-week certificate programs to make it faster and less expensive for young people to “get into the game” with their careers.

In the panel discussion that followed, Wagner explained that LambdaVision creates protein-based retinas for those suffering from macular degeneration. The company, she explained, utilizes the International Space Station to manufacture in a gravity-free environment and thereby have fewer imperfections in the final product. While LambdaVision outsources much of its business, she said, the company is looking into additional applications for the protein-based products that they create. She suggested that, in the future, more than just engineers will be needed for commercial space stations and encouraged the state to support training programs.

Ballesteros said that The Jackson Laboratory has had no trouble attracting “top notch” research scientists and staff but said that the state could support more competitive research and development funding.

Hazard said that Novo Precision’s mission is to “solve customer problems.” To that end, he said, they can design just about anything. Novo works with a variety of companies including medical, HVAC, firearms and more. He added that he grew up in Bristol and that he didn’t look anywhere else when starting his business.

Novo said that Connecticut’s engineering and technical schools provide a “great foundation” to build on. He also thanked Malley for being a “great partner.” Since opening in Bristol, Novo has grown from 20 employees to 65.

“We’re continuing to grow and build,” he said. “We just got in two new CNC machines and we brought in another last week. It’s good to be in Bristol.”

Hazard encouraged the state to continue supporting internships, noting that he recently started working with three students from Bristol Tech and that he hopes to hire them all.