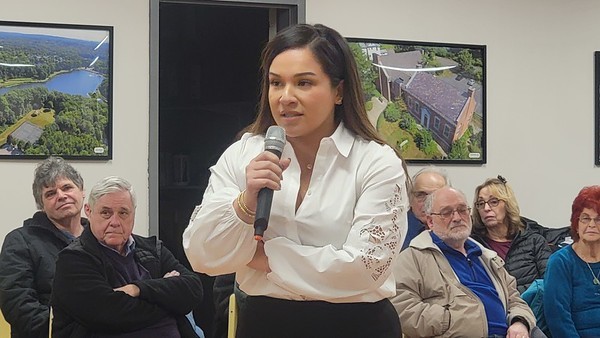 File photo Aileen Abrams at a previous debate with her opponent, Joe Hoxha. Buy this photo
Published on Friday, 20 May 2022 21:23
Written by Dean Wright

Candidate for State Representative of the 78th District Aileen Abrams said that despite the endorsement of her opponent Joe Hoxha by Plymouth and Bristol Republicans for the district seat, she is going to push forward with primary election procedures because of her supporters’ encouragement.

The 78th District State Representative seat has been held by Whit Betts for several years. He will not be running for another term, however.

Abrams said that due to Connecticut law, the Republican delegates for Bristol were not certified with the town clerk’s office in accordance with Connecticut General Statutes Section 9-391 in time to endorse Hoxha at the Tuesday convention vote. Bristol Town Republican Committee Chair Rich Kilby said, to his knowledge, that as long as good faith efforts are met to credential delegates, the convention credentialing committee can go ahead and name the delegates necessary for the endorsement vote.

“It was a technicality that I had all the forms and somehow that one got left behind, the 78th. It was filed with State Central and also Plymouth and the credentialing committee verified all the delegates,” said Kilby. “I feel bad about the mishap. I thought they were all in order and unfortunately I left behind and I’ll take all responsibility of that.”

“But it was because supporters reached out the last couple days since convention that I’m going to move forward with the petition,” said Abrams. “I will not be challenging his nomination or endorsement, but I will be petitioning to primary.”

Abrams was born in Hartford to a social worker originally of Arecibo, Puerto Rico, and a mother who worked in fast food after immigrating from Chavina, Peru. Eventually, Abrams’ family moved to Newington in search of what members felt were better educational opportunities. The candidate noted much of her adolescence was spent between family and friends with the Hartford Peruvian community and a suburban life in Newington.

She would eventually become a nursing assistant but moved on to get a job in sales. Abrams worked in a variety of sales roles and industries through her mid-twenties before becoming an entrepreneur and opening a Merchant Cash Advance office with a partner. She worked to refine her business and social relationship skills by working with small businesses throughout Connecticut as her business expanded to include contract work.

She now works as a director of market research with Mark Bruce International, a legal recruiting firm in Manhattan.

Abrams also worked as a small business banker for a period and said during such time it helped her to observe the effects of the pandemic at a local level on businesses. Because of this, she started to look at how to become involved with area politics and during and after a past race against Whit Betts, built a friendship. Since that time, she now seeks to serve her community.

“I believe it’s important to be a proactive member of the legislature and not just a reactive member that votes yes or no along party lines,” she said. “I intend to propose meaningful legislation for the benefit of the entire community, not a select few. I will defend the inherent rights of all our Connecticut taxpayers. We must not let the current leadership take guardianship over the people’s state.”

Issues she feels strongly about include returning rights to families in how they make decisions for their children, providing better support for law enforcement and to change legislation she feels harms homeowners and landlords, among others.